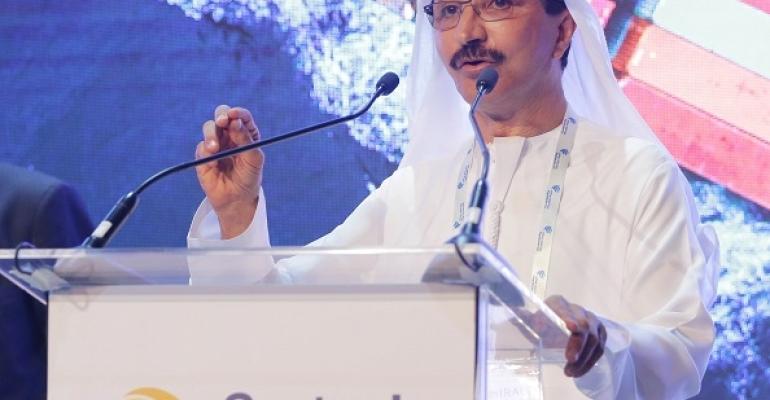 Major port operator DP World is focusing on innovation and infrastructure and development to stay ahead of the curve.

Guest of Honour at the opening of the 9th Seatrade Maritime Middle East event in Dubai this week was H.E. Sultan Ahmed Bin Sulayem, group chairman and ceo of DP World, chairman of Dubai Ports, Customs and Free Zone, and chairman of Dubai Maritime City Authority.

Seaborne trade forms “the largest, cheapest and most efficient part of the logistics chain”, he said in remarks preceding the Port Technology conference session, “but still needs to continuously implement innovation” or risk disruption by outside players.

It is estimated that new technologies can account for as much as a third of the predicted healthy growth in trade between now and 2034, he added - despite the current spectre of “trade wars and protectionism”. He personally dismissed these threats as “more emotional and a negotiating tactic” than likely to have any “real effect”, he added, since “eventually it will come to [sitting down at] a table where people will have to trade.”

Dubai itself has a particularly bright trade future because it serves a region of almost 2.5bn people, he continued, including a lot of cargo bound for Africa, “so naturally is one of the points on the Belt and Road Initiative.”

Hence DP World is not letting up on “infrastructure development,” he said, including “innovation in ports in particular.” For example, it has developed its own blockchain system that has gone live and is being tested already, and is expected to be rolled out to many of its customers next year.

Terminal operators like DP World have had to evolve and follow their customers’ problems right along the delivery chain from factory to when it reaches the customer, the chairman explained, as opposed to thinking their job stopped at the port gates like before. This is why the group has been moving into areas like Logistics Parks, in order to help customers with more efficient delivery of their cargos.

By the same logic DP World has invested in development research for the highly innovative potential delivery solution Hyper Loop - a mock-up of which is currently garnering much attention on the DP World stand in the Seatrade Maritime Middle East exhibition.