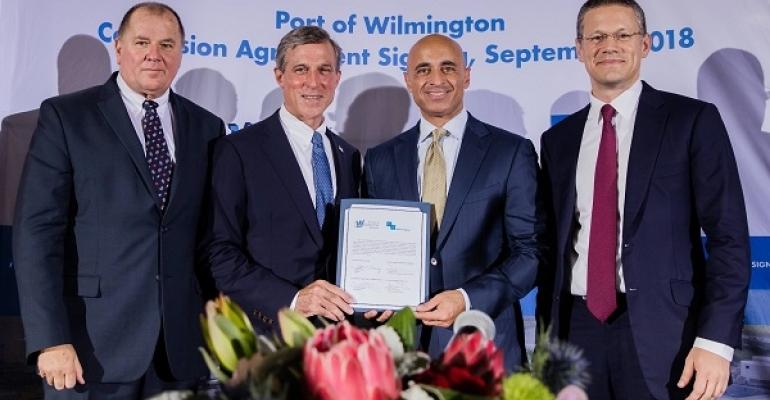 UAE-based Gulftainer has finalized a 50-year concession agreement with the state of Delaware to operate and develop the Port of Wilmington, significantly expanding the company’s global footprint and reach.

The deal will see an expected investment of up to $600m in the port to upgrade and expand the terminal and to turn it into one of the largest gateways on the US Eastern Seaboard, including $400m on a new 1.2m teu container facility at DuPont’s former Edgemoor site, which was acquired by the Diamond State Port Corporation in 2016.

The Port of Wilmington is already the top North American port for fresh fruit imports and has the largest dockside cold storage facility in the US.

Plans for the port also include development of all cargo terminal capabilities at the facility and enhancement of its overall productivity. Gulftainer will also establish a training facility at the development site specifically for the ports and logistics industries that is expected to train and upskill up to 1,000 people per year.

The 50-year concession follows a year of negotiations and a thorough evaluation of Gulftainer’s capabilities globally, including in the US, where it operates the Canaveral Cargo Terminal in Port Canaveral in Florida, and provides services to the US Armed Forces as well as the US space industry. The Delaware concession agreement completes a preliminary agreement between Gulftainer and the state of Delaware, as well as the completion of a formal review by the Committee on Foreign Investment in the US (CFIUS), granting Gulftainer exclusive rights to manage the port.

Gulftainer chairman Badr Jafar said: “We are proud to be making this long-term commitment to the state of Delaware, its community and its economy. This landmark agreement builds on Gulftainer’s 43-year track record of delivering excellence and dependability in ports and logistics operations around the world, and we are confident that this public-private partnership will propel the Port of Wilmington towards becoming the principal gateway of the Eastern Seaboard.”

Jafar added: “Since Gulftainer’s entry into the US through our operations in Port Canaveral in 2015, we have discovered major untapped potential in this sector and we will continue to look for attractive investment opportunities in the region.”

Group ceo Peter Richards said: “Gulftainer has been fortunate to be at the forefront of transforming port and logistics operations in four continents around the world. This deal is a milestone in our operating history, and will provide us the platform to make a real difference to the sector on the US East Coast by working closely with the state of Delaware to achieve significant enhancements across the board.”