Higher fuel prices in 2020 could shift 1.2m teu back to US West Coast ports 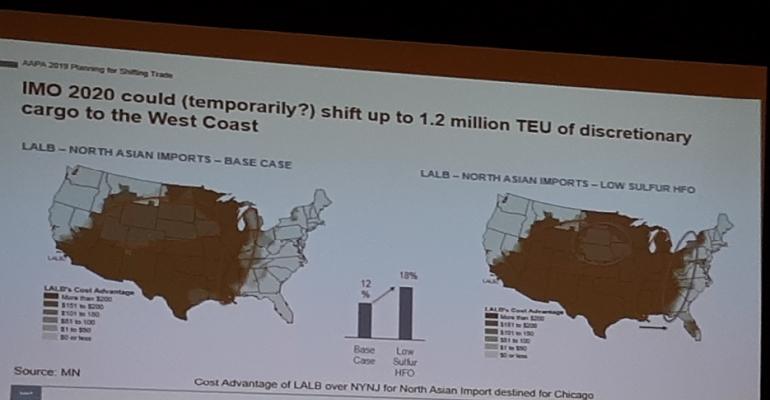 The expanded Panama Canal saw container trade switching from the US West Coast calls, with landbridge connections inland, to calls on the East Coast, however, higher fuel costs associated with the IMO’s 2020 sulphur cap could drive up to 1.2m teu of trade back to West Coast ports.

The American Association of Port Authorities (AAPA) “Planning for Shifting Trade” Conference this week highlighted both sides of the equation on trade flows between Asia and the US and the timing could not have been better.

Paul Anderson, president and ceo of the Port Tampa Bay, opened the two day event with the news that Cosco’s “Gulf of Mexico Direct” service, with a link between China to Tampa via the widened Panama Canal, had seen its first port call on the previous day-with the arrival of 4,250 teu Cosco Piraeus following stops in Mobile, Alabama and Houston. In his remarks, he detailed the port’s prescient investment, in 2012, in two cranes capable of working post-panamax vessels.

This year’s keynote speaker, Josh Hurwitz, senior consultant at port engineering specialist Moffatt & Nichol, offered a detailed perspective on the port business at a strategic level. The key point of the presentation: “Just because the macro [economic] trends are in your favor, does not mean that the cargo will flow.”

The depth of the speaker’s expertise was fully on display with colour switches on geospatial maps indicating flows of cargo- or not. Just when I thought I’d become an expert on every facet possible of IMO 2020 - price spreads, scrubber economics and all, I was exposed to a new angle.

The movement of cargo moving directly to the US East Coast has been amplified by the opening of the widened Panama Canal, in 2016. At that time, conference presentations stressed the shifting breakeven, with maritime transport to the US East Coast - cheaper than land transport via railway with economies of scale from larger vessels - able to penetrate further west, deeper into the US hinterlands than previously. Cargo shifted TOWARDS the US Atlantic and US Gulf ports on bigger vessels making longer voyages through Panama.

Fast forward to 1 January 2020- when expected upward shifts in maritime fuel prices are expected to occur. Hurwitz suggested that as much as 1.2m teu of cargo could potentially shift BACK to Los Angeles / Long Beach, at least temporarily - with panoply of colors indicating cargo flows on the geospatial map leaning westward.

For port planners on all coasts, the implications are that there could be a surge of cargo through West Coast ports with a revival of recent congestion problems.

Fuel matters were also touched on by another speaker Howard Finkel, representing Cosco Container Lines, who discussed ongoing efforts of carriers to develop mechanisms for recouping fuel price increases. With 2020 still approaching, these Bunker Adjustment Factors (BAFs), throughout the industry, are still a work in progress.