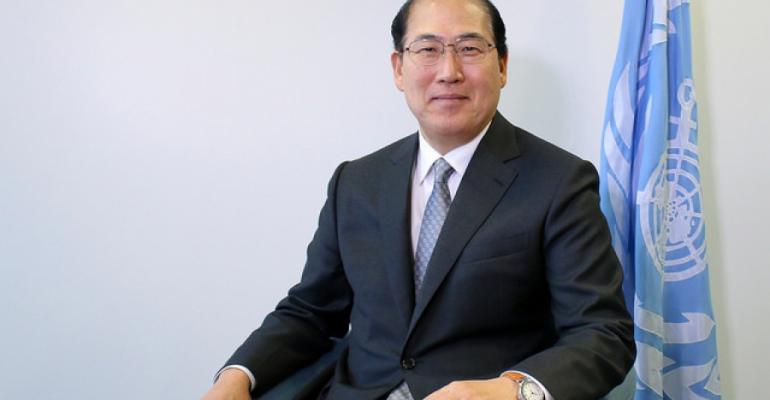 IMO secretary-general Kitack Lim
With the continued developments of e-navigation the human machine interface is becoming increasingly important, with human oversight remaining the key in safety.

Speaking at the International [email protected] Conference in Singapore, IMO secretary-general Kitack Lim highlighted in the period 2006 – 2015 shipping losses had decreased by a “staggering” 45%. “Clearly ships have never been safer but yet the IMO continues to look for further improvement,” Lim stated.

A key part of this improved safety of navigation will be adoption of modern technology. “Modern technology provides unprecedented opportunity to reduce the chances of human error and thereby help therefore enhance safety and reduce casualties further,” he said in his keynote at the conference organised by the Maritime & Port Authority of Singapore.

While in recent years there has been a lot of talk about autonomous ships Lim believes that the human element will remain key in the safe navigation of ships in the future.

“I do not believe you can take the human away from the ship when it comes to navigation, particularly in busy waters where the eyes of the watch officer are still quicker. The unpredictability of the high sea will also be an issue requiring human oversight, no matter how advanced the technology is.”

What is important is that technology new will make maritime navigation and communication more reliable and user friendly.

UK Maritime & Coastguard Agency, director of maritime safety standards, Katy Ware agreed with Lim’s views on the importance of human and technological interaction in the future safety of navigation.

“It is the whole human machine interface and that is becoming ever more important. We’re developing all these marvelous systems but the key is making sure people know how to use them, they are confident with them,” Ware told Seatrade Maritime News on the sidelines of the conference.

Failure to do this can actually result in marine casualties. “We’ve had a few incidents in the UK where a lack of training around ECDIS has caused serious groundings.”

As with Lim she believes the human element will remain key in navigation. “There’s still a lot be said for keeping a lookout and standing on the bridge wing and feeling the elements.”

Ware noted an ongoing accident investigation in the UK where a “very futuristic bridge design” was found to have put spatial awareness by the crew at risk.