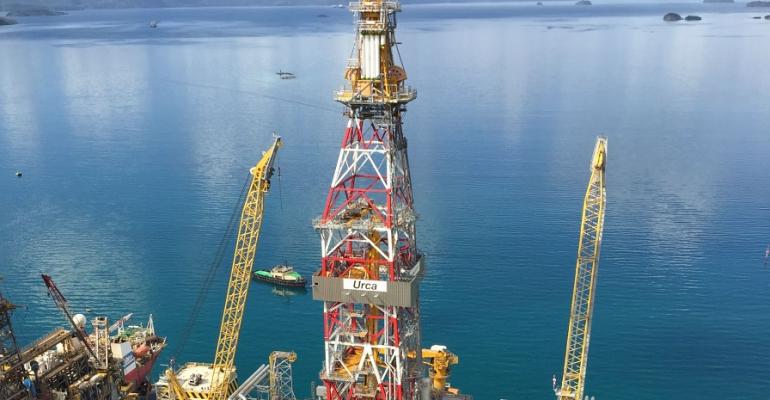 Nearly five years after payments stopped being made by Sete Brasil to Keppel Offshore & Marine for six semi-submersible rig newbuildings a resolution has been reached which will see the Singapore shipyard owning four of the uncompleted rigs, and two by Magni Partners.

Keppel said its subsidiaries Keppel FELS and Fernvale had entered into a settlement agreement with Sete Brasil subsidiaries over the Engineering, Procurement and Construction contracts (EPC Contracts) for the six rigs.

The settlement agreement sees Keppel’s Fernvale takeover ownership of four rigs, all far from completion, which arose from the EPC contracts. The four rigs comprise the EPC contracts with Brauchy and Portogalo, which are 40% and 21% completed respectively, and the Mangaratiba and Botinas, which are less than 10% complete.

The four contracts have been deemed to be amicably terminated with no penalties or refunds due.

“When the Settlement Agreement comes into effect, Fernvale will have full ownership over the four uncompleted rigs, and will be able to explore various options to extract the best value from these assets,” Keppel said.

The two rigs newbuilds closer to completion – the EPC Contracts for the Urca and Frede – are set to be owned by Magni Partners, a company controlled by Tor Olav Troim chairman of Borr Drilling. The Urca (pictured above) and Frede are 92% and 70% complete and Fernvale is in discussions with Magni Partners on terms to complete the construction of the rigs.

Reuters reported, citing sources, that the Urca and Frede would be leased to Petrobras for 10-years at $299,000 a day, with similar deals for the rig newbuilds Arpoador and Guarapari that Magni Partners would take ownership of.

Read more: Resolution in sight for some Sete Brasil rig orders at Keppel O&M and Sembmarine

For the two rigs a total sum of close to $260m will be recognised as part of the undisputed debt included in Sete Brasil’s court-approved Judicial Reorganisation Plan, and paid to Fernvale proportionally and pari passu with the other creditors of the Sete Group as part of, and out of the proceeds of the plan.

“When the Settlement Agreement becomes effective, Keppel O&M would be able to resolve a long outstanding issue related to the six rigs, and look forward to exploring other opportunities to contribute to the oil and gas industry in Brazil,” Keppel said.

The Settle Agreement is subject to conditions including the successful sale of the Urca and Frede to Magni Partners.

Keppel had received $1.3bn from Sete Brasil before payments stopped in November 2014.

Sete Brasil also had seven drillships on order from Keppel’s compatriot builder Sembcorp Marine (Sembmarine) and payments similarly stopped in November 2014. Four of the seven drillships were between 90% and 50% complete.

The rigs orders formed a very substantial part of the orderbooks of Keppel and Sembmarine and were worth $4.9bn and $4.8bn respectively.