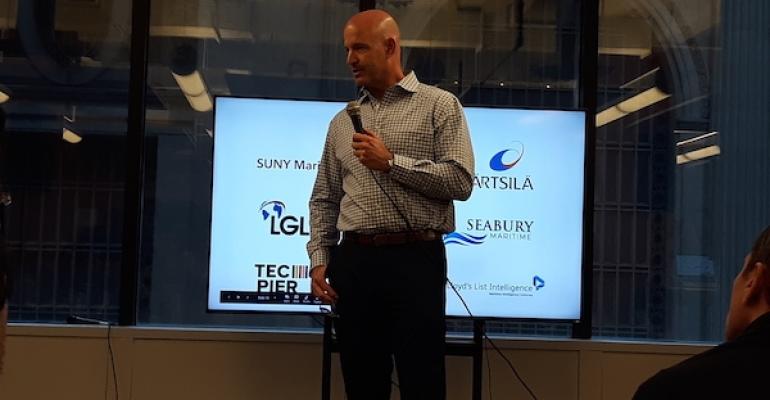 Once in a while, a service provider engaged in projects with the maritime business actually brings real connections with its target market to its work. Take the NYC Maritime Hackathon 2019 The event, held in midtown New York, was produced in conjunction with the New York Maritime Innovation Center.

Teams of information scientists, just about all without any maritime backgrounds whatsoever, had met up, for the first time, on a Friday evening. They were quickly immersed in detailed high level summaries of the maritime business, offered data provided by Lloyds List Intelligence, and TecPier - an early stage investor in maritime projects.

By Sunday afternoon, less than 48 hours later, they had created mockups of products and presented their visions to a panel of judges. Importantly, all of the eight groups presenting to the judges had noted the frustrations in dealing with data in the maritime realm.

Seabury Maritime, a maritime and other transport modes, investment advisory and merchant banking specialist, part of the bigger Seabury Capital Group, was one of several sponsors supporting the Hackathon. Other sponsors included ABS, Wartsila, and Liberty Global Logistics, part of the Liberty Maritime group.

One of the Seabury bankers, maritime industry veteran Fernando Lehrer, executive director, explained that “[We have been] focused on applying innovative solutions and technology to the maritime industry since its inception , and this event represents a rare opportunity for maritime industry and tech executives to collaborate together to build prototypes and deliver rapid fire market validations for commercial viable technology solutions.” 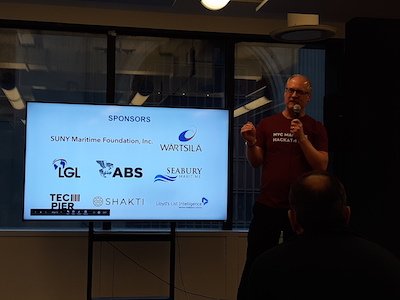 Chris Clott, the driving force behind the SUNY Fort Schuyer’s NYMIC, explained: “Our purpose here is to building a maritech eco-system.” His NYMIC colleague, Josh Shapiro, from Liberty Maritime, said: “We think that this community can grow very quickly in the New York area.”

There was a certain irony to this event. Consider that Lehrer, from Seabury, previously worked with ABS. The president and ceo of Seabury’s maritime practice, Ed Zimny, has decades of industry experience going back to his days working alongside Malcolm McLean at SeaLand. The ABS and Wartsila folks on hand also brought similar tenures of hands on experience to the event.

Yet here’s the rub, the first prize winner, after the judges deliberations, who created a company called Doc-It had no maritime experience athough on the side, one confessed that he had an uncle “who did something in the business with boats”.

Their concept was to apply Artificial Intelligence (AI) to comprehend the vast panoply of maritime documents. Not using the dreaded B-word (“Blockchain”) one time, they instead looked to the vast data morasses of the Health Care industry for inspiration. “In health care, integrity and privacy of data are paramount,” one of the presenters said, a familiar refrain to shipping people.

So, instead of standardising data, the team was blissfully unaware of discussions underway on such topics, especially in the liner side,, the presenting team said that they could pull it in to large central database (likely on an information cloud), identify inconsistent data fields while decompiling it, and then use AI to recompile it so that inconsistencies were overcome.

In one example cited, they suggested that “shipment origin” - on one company’s form - could be crossed up with “loadport” - on another company’s paperwork.