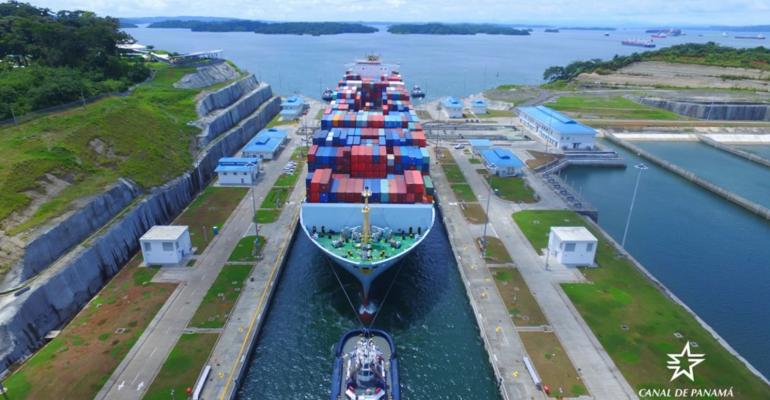 The Panama Canal Authority (ACP) has announced that starting 1 Jun, it will allow transit of post-panamax containerships with a beam of 51.25m, up from 49.00m today, and with it the transit of 20-row wide boxships up from the current limit was of 19-rows.

According to analyst Alphaliner, the overall capacity on the route is expected to increase by 10%, until July, based on nominal vessel intakes. The capacity increase on the far East-US East Coast route, planned for this summer will be spread almost uniformly across each of the main carriers, it said.

The Ocean Alliance, from 1 May, is upsizing to 13,000—14,400 teu vessels on two of its seven existing all-water strings [AWE 1 and AWE5/SAX]. The two loops will deploy 19-row-post panamaxes via the Panama Canal while The Alliance will add 9.8% to its overall all-water capacity this year, said Alphaliner. It will deploy 20-row-wide ships that, so far, were not allowed to transit the waterway.

Average vessels sizes in the Far East-USEC trade have increased significantly since 2016 and Canal expansion inauguration, especially on the Panama route. The impact of bigger and larger new locks led average size vessel to increase from 4,600t eu in early 2016 to 8,300 teu by July 2018, commented Alphaliner.

The $5.5bn-Panama Canal expansion has allowed Panama to regain most of the all-water trade share that it lost to the Suez Canal during its construction between 2010 and 2016. Panama’s traffic share (based on head-haul passages only) currently stands at 72% compared to 48% at January 2016.