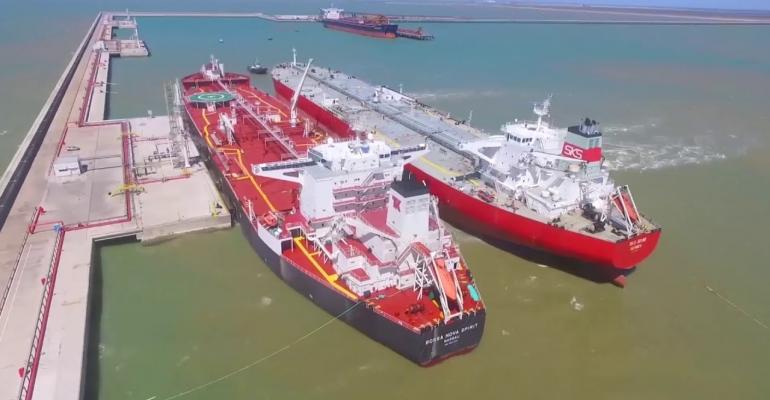 Petrobras and Açu Petróleo, have signed a contract to carry out ship to ship operations at the company's Petroleum Terminal (T-OIL), located in the complex of Port of Açu.

The contract establishes up to 48 operations with suezmax and VLCCs vessels and lasts for 24 months, which may be extended for the same period.  Petrobras currently operates only at their own terminals: Angra dos Reis (TEBIG) and São Sebastião (TEBAR) for oil exports.

Açu Petróleo, is a partnership of Prumo Logística and Oiltanking, the port is located in the north of the state of Rio de Janeiro.

With 25 metres of water depth, T-OIL is the only Brazilian private terminal with capacity to receive VLCC class tankers. The terminal has the capacity to perform three oil transhipment operations simultaneously and is licensed to handle up to 1.2m barrels of oil per day.

"The signing of this agreement with Petrobras reinforces the importance of the differentials of our Terminal in the decision process of our customers. We are the only private terminal in the country capable of receiving VLCC ships, besides providing predictability and safety in operations, which are carried out in a safe area, with efficiency, reliability, respect and care for the environment. These differentials have been confirmed as priority factors for our customers, such as Petrobras and Equinor," said Victor Snabaitis Bomfim, ceo of Açu Petróleo.

Last week, Açu Petróleo also signed an agreement with Equinor to carry out ship-to-ship operations at the terminal. The contract will start on January, 2020 for a period of 36 months to support mainly the oil produced in the field of Roncador.

"For this year, we expect to increase by two times our volume transshipped in 2018, when we reached approximately 40 million barrels a year. Moreover, we advanced in the development of the onshore tanker project which, in addition to provide a better optimisation of the DP ship fleet for our customers, will offer new services such as warehousing, dewatering and blending," said Bomfim.