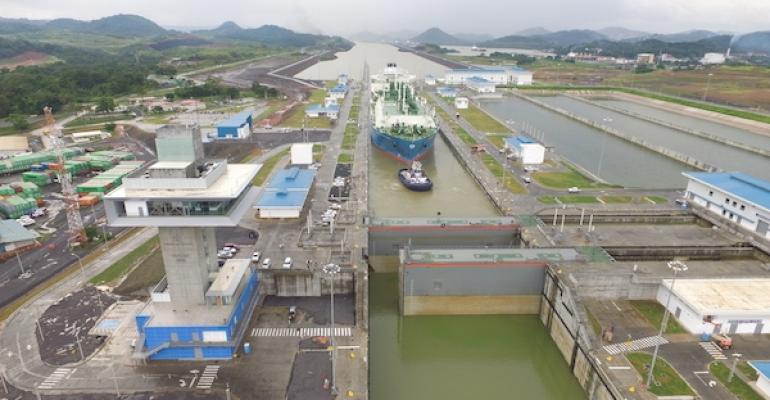 The maximum authorised draught for vessels transiting the neo-panamax locks will be 13.41 metres (44 ft) Tropical Fresh Water (TFW) compared to a design capacity to allow vessels of a 15.2 metre draught.

Draught adjustments will be announced in 30.5cm decrements, generally with at least four weeks advanced notice.

The draught of the original locks has not been affected and “we do not think it will be affected,” said ACP officials.

“The Panama Canal has taken measures in order to reduce the impact of the [dry] season by using the water-saving basins, closing the Gatun hydropower station, as well as implementing the Panamax Water Conservation Programme. This includes not using hydraulic assist at the locks, tandem lockages (two ships in one lockage, whenever possible), and chamber cross-filling operations,” ACP Vice President for Water and Environment Carlos Vargas told Seatrade Maritime News.

The waterway authorities reported that the period from December 2018 to March 2019 has been the driest in the last 106 years. The antecedent of greater consequences for the Panama Canal was El Niño phenomenon occurred in the dry season of 1997-1998, until that moment the most intense of the century, when it was necessary to programme electrical blackouts of up to two hours a day.

Canal officials said that it was “very difficult to determine the number of vessels affected by the draught reductions since the vessels are notified of the change in draught with more than 4 weeks in advance so they can plan their loading and adjust their draughts accordingly. Once the vessels arrive, there is no way of telling if they adjusted their cargo due to the canal’s draught restrictions or not.”

“We cannot know for sure if we have lost transits or revenues in tolls due to the restrictions currently imposed, but if the maximum allowable draught continues to be reduced, we will certainly at some point start losing transits," ACP officials told Seatrade Maritime News.

It is likely that global warming has been determinant and contributed to El Nino climatic phenomenon making the last four months of December, January, February and March so far, the driest ever registered at the Panama Canal.

“The intensity of the solar radiation, added to a 30% increase in the winds, is causing the water in the lakes Gatun and Madden to evaporate at a faster rate than it enters and lake levels are falling at breakneck speed,” Vargas told local media. Gatun Lake has a deficit of 1.1 metres and Madden Lake of 2.7 metres.

The North American Agency of Atmospheric Administration (NOOA,) warned that there is an 80% chance of the El Niño phenomenon continuing until June.

The US agency estimates also indicate that there is a 60% probability that El Niño will continue until next August. "That makes the operation of water resources riskier," said Vargas.