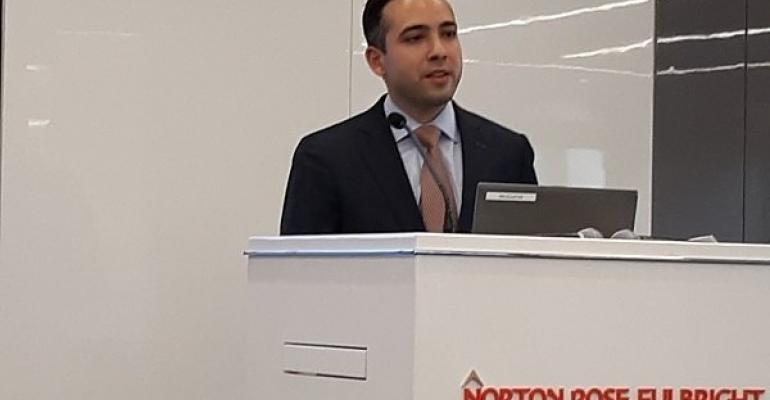 The New York and global ship finance markets are in a “wait and see” mode was the message from Evercore Group md Yohan Minaya in a recent presentation.

The Annual General Meeting of New York Maritime (NYMAR) wasn’t just about bylaws and networking, and the organisation’s tagline “The Capital for Shipping” was not lost on the meeting’s organizers, who put together an exceptionally good presentation on the state of the financial markets for shipping.

The keynote speaker, Minaya of Evercore Group provided an overview of shipping’s capital markets- which provided the grist for a lively discussion on the role of New York in a very networked world. Discussion moderator Jeff Pribor, now cfo at International Seaways, and previously a banker, a member of NYMAR’s Board, explained simply, “From other shipping centers in the States, and from Europe, they all going to come to New York- for the legal expertise, and for the depth of the financial markets.” In Minaya’s presentation, the overarching message was that shipping finance, certainly around the New York market, and other markets around the globe, was in a “wait and see” mode. Reiterating the widely known absence of Initial Public Offerings (IPOs) in New York since 2015, he stressed that recent Merger and Acquisition (M & A) deal action has centered around Private Equity (PE) investors seeking to exit deals.

His presentation slides showed that M&A activity in 2017 totaled nearly $6bn, followed by $5.4bn in 2018. In the absence of the IPO exit route, the channel of private investors glomming on to already listed companies has been the path to the doorway out.

He noted that in many cases, certain corners of the tanker market being an exception, share prices well below the Net Asset Value (NAV) purchases using shares as currency, a traditional acquisition medium, have been impractical. Tankers, Minaya suggested, may be past “a point of inflection, and could be in a cyclical rebound”.

In discussing the banking environment, he stressed that where European banks have reduced their lending exposure to shipping, with syndicated loans declining from $70bn in 2015 to $38bn in 2018, alternative financing sources are filling some of the voids. The new funding sources have included commercial bank lending alternatives - Macquarie was mentioned, mezzanine type lenders - Northern Shipping Funds was cited, and providers of lease finance - notably Chinese - who buy ships and charter them back to the sellers.

All roads continue to lead to New York; the mood at NYMAR was upbeat.