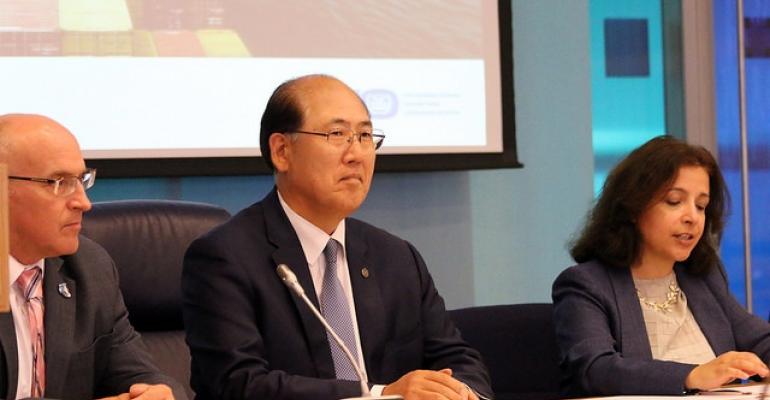 The shipping industry has lauded an initial strategy adopted by the International Maritime Organization (IMO) to reduce GHG emissions by at least 50% of 2008 levels by 2050, but others were less impressed.

After a week of negotiations at the IMO Marine Environment Protection Committee (MEPC) meeting an initial strategy for climate change was agreed.

The initial strategy envisages for the first time a reduction in total GHG emissions from international shipping which, it says, should peak as soon as possible and to reduce the total annual GHG emissions by at least 50% by 2050 compared to 2008, while, at the same time, pursuing efforts towards phasing them out entirely.The strategy includes a specific reference to “a pathway of CO2 emissions reduction consistent with the Paris Agreement temperature goals”.

“I encourage you to continue your work through the newly adopted Initial GHG Strategy which is designed as a platform for future actions. I am confident in relying on your ability to relentlessly continue your efforts and develop further actions that will soon contribute to reducing GHG emissions from ships,” said Kitack Lim, secretary-general of the IMO.

Pressure to act on GHGs

The IMO has faced heavy pressure to act on GHG emissions from shipping and failure to reach MEPC would have almost certainly opened the door to regional regulation in Europe.

Shipping reprentative groups lauded the initial strategy agreed at the IMO. "The IMO has done something no one has done before: set an absolute target for emission reductions for an entire industry. It is a landmark achievement in the effort to reduce emissions, and something that every other industry should look to for inspiration," said Lars Robert Pedersen, Bimco deputy secretary general and delegate at the IMO meeting.

International Chamber of Shipping, secretary general, Peter Hinchliffe stated: “The agreed IMO objective of cutting the sector’s total GHG emissions by at least 50% before 2050, as part of a continuing pathway for further reduction, is very ambitious indeed, especially when account is taken of current projections for trade growth as the world’s population and levels of prosperity continue to increase.”

Martin Dorsman, secretary general of the European Community Shipowners Association (ECSA) said: “The shipping industry is now the first global sector with concrete figures for the reduction of GHG emissions. And also that the ultimate goal is full decarbonisation is an achievement for which the IMO should be commended.”

Guy Platten, ceo of the UK Chamber of Shipping said: “This agreement commits the shipping industry to reducing its carbon emissions by at least 50% by 2050.  But crucially this should be seen as a stepping stone towards decarbonisation in the long term – something which must be continue to be a major focus in the years ahead.

However, environmental groups that have put pressure on the IMO to act of GHG emssions from shipping were less enthusiatic in their praise believing much more could have been done.

Bill Hemmings, shipping director, Transport & Environment, said: “The IMO should and could have gone a lot further but for the dogmatic opposition of some countries led by Brazil, Panama, Saudi Arabia. Scant attention was paid to US opposition. So this decision puts shipping on a promising track. It has now officially bought into the concept of decarbonisation and the need to deliver in-sector emission reductions, which is central to fulfilling the Paris agreement.”

James Mitchell, maritime finance lead with Rocky Mountain Institute-Carbon War Room, commented: “A 50% reduction in total GHG emissions was not the truly ambitious, Paris-aligned target we had hoped for but it is a truly significant first step on the path to decarbonization and there is much to congratulate. Policymakers can begin work on crafting measures to achieve this ambition and shipowners, operators, and financiers can put improving energy efficiency at the heart of their business plan today - in line with the agreed 40% reduction in carbon intensity by 2030.”