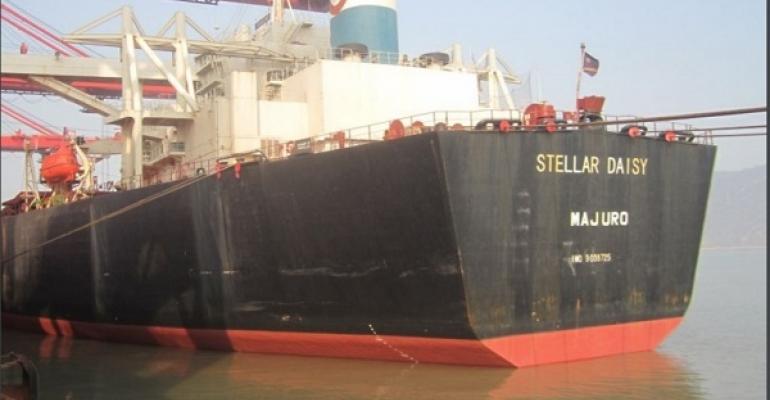 The VLOC Stellar Daisy, which sank in March 2017 with the loss of 22 lives, suffered catastrophic structural failure according to a report by the flag-state Marshall Islands, with classification society Korean Register defending its position in relation to analysis and reporting on earlier damage to a bulkhead.

It in its report into the casualty the flag state, Republic of the Marshall Islands (RMI) said it was “determined that the likely direct cause of Stellar Daisy foundering was a rapid list to port following a catastrophic structural failure of the ship’s hull that resulted in a loss of buoyancy and uncontrolled flooding”.

“The hull failure was likely due to a combination of factors, including the likelihood that the ship’s structural strength had been compromised over time due to material fatigue, corrosion, unidentified structural defects, multi-port loading, and the forces imposed on the hull as a result of the weather conditions Stellar Daisy encountered between 29–31 March 2017,” the report said.

The report highlighted three likely causal factors – large ballast water tanks, increasing the potential for major structural failure; a gap in IMO regulations that does not require an assessment to ensure bulk carriers of 150 m or more in length of double-side skin construction designed to carry solid bulk cargoes of 1,000 kg/m3; and ineffective assessments of structural damage identified when the Stellar Daisy was dry docked in 2011, 2012, and 2015 to determine the cause of the structural damage.

Issues were particularly highlighted in damage to transverse bulkhead 65 and failure analysis by KR first in the vessel’s 2011 dry docking and a failure to notify RMI on damage to fame no.65 in 2016.

Commenting on the 2011 failure analysis KR said: “The RMI report correctly states that a failure analysis of the damage to the transverse bulkhead at frame No. 65 was conducted as it was determined by the attending surveyor to be ‘out of the ordinary’ and similar damage was not found in other parts of the ship.

“However, the cracks/defects identified and repaired at the time of drydocking in 2011 were determined to be those typically found on board ships of a similar age (note that Stellar Daisy was 18 years old in 2011). Based on this observation, the attending surveyor determined that the cracks/defects were not “out of the ordinary” and as long as proper repairs were performed, a failure analysis was not needed.”

The failure by KR in 2016, acting as the Recognised Organisation (RO) for RMI, to report damage to the frame No.65 the classification society said: “As stated in the casualty investigation report, a failure analysis was carried out to assess the structural integrity of damage to the transverse bulkhead at frame No. 65, the result of which showed that there was no area of concern and proper repairs were undertaken to renew the damaged part to its original condition.

“KR also examined the surrounding bulkheads of Stellar Daisy as well as bulkheads on 29 other converted VLOCs (approximately 230 bulkheads in total) to determine if there were any similar defects. The result of this extensive investigation was that there were no areas of concern. As a thorough inspection and comprehensive repairs were undertaken, KR determined that there was no “dangerous” structural issue that warranted reporting to the flag Administration.”