Sustainability and the environment take centre stage at CMA 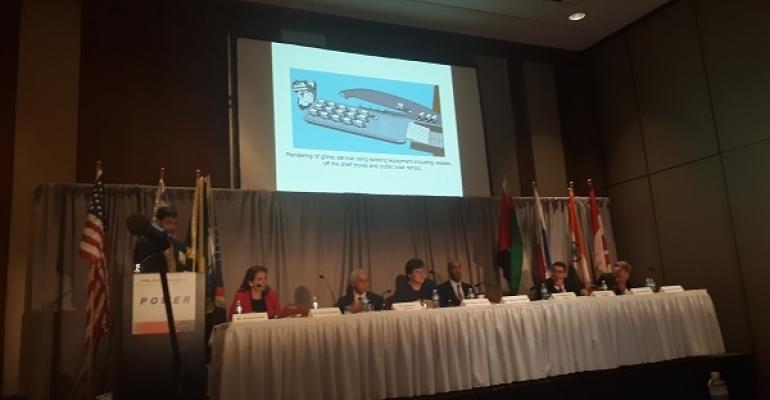 In a sign of the times the Connecticut Maritime Association’s annual conference this week the fuel-related sessions were not relegated a rabbit warren of meeting rooms at the back but instead took centre stage in the Grand Ballroom.

One of the better sessions, titled “Accepting the Challenge” examined how socially responsible investments, which are no longer a “soft” issue, also relegated to the back rooms, could comport with the traditional template for a maritime business- profitability. Though sulphur dictates of 1 Janaury 2020 looms less than nine months into the future, this particular panel looked further out, towards 2050 when the business must reduce its overall greenhouse gas emissions (CO2).

Speaker Matthie de Tugny, from Bureau Veritas, offered timelines detailing the switch from sail to steam to diesel fuel and then on to LNG. However, the present dilemma has the industry already looking beyond 2020. He presented slides offering potential fuel sources for the future, saying “There’s no silver bullet- the next decade will be critical.” He suggested that: “The road to 2050 needs to work operationally and financially.”

Panelist Alexander Saverys, ceo of CMB Group, crystallized the dilemma, saying: “we are doomed by ROI…we need to make money….that’s the big challenge…..but we also need to find a technology that is both environmentally sustainable and makes economic sense”.

But Saverys’ outfit has moved into the practical realm. He told conference attendees, filling the big room, that CMB Group had looked at LNG but was dissuaded due to logistics - availability in ports - and economics - too expensive). Instead, it is now taking early initiatives in the realm of hydrogen fueling- which can be stored in solid, and sometimes liquid form, and then injected into engines and burned much like LNG, in a dual fuel configuration.

Though it’s “early days”, as he acknowledged, for hydrogen, with storage being the biggest stumbling block, “we are trying now to see if we can build bigger engines on bigger ships.” He mentioned a small passenger ferry project already underway and mentioned that a future project would involve a larger transport vessel. He discussed a hydrogen bunkering station under construction- saying “we need to find a solution instead of compressed gas.”

Presenter Martin Crawford-Brunt, ceo of ship vetting provider RightShip, explained that “people are realizing that good business is also good for the environment” and that “those people who realize that the world has changed will be in a good position”.

Interest in sustainability has ratcheted up recently, with Crawford-Brunt saying: “We estimate that in about 75% of vettings- there is an element of environmental sustainability, with a big increase lately.”

He also described an uptick of interest in “carbon accounting” projects, and described a case where an owner utilized “carbon offsets” pegged to a voyage where a vessel was repositioning to a drydock. In response to an audience question, the RightShip ceo acknowledged that RightShip greenhouse gas metrics are not perfect, but that “proactive owners can use these ratings to their advantage.”

Paolo d’Amico, current Intertanko chair, provided the best context, in responding to a question about the investment side of scrubbers. He explained that fuel security was paramount, but on the whole issue of new fuels, “we are jumping into a world we don’t know.”