Unfinished business – a poor start to the year for marine safety 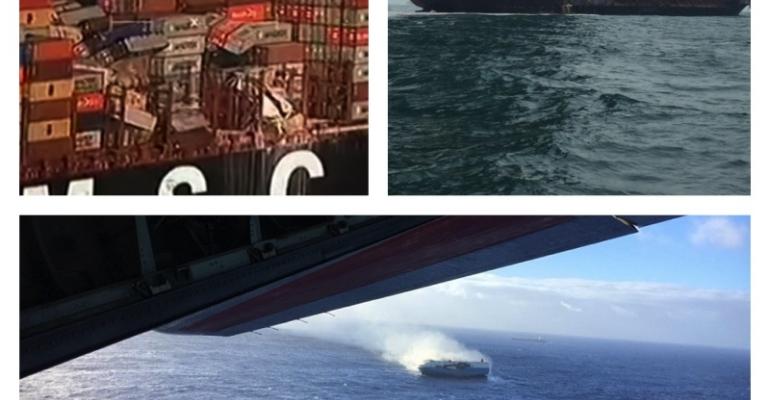 The year has not started off well or the shipping industry and the cause of marine safety. The fatal fire aboard the vehicle carrier Sincerity Ace cost the lives of five seafarers and will have destroyed 3,600 cars and most probably the vessel herself.

Meanwhile the ongoing fire aboard the containership Yantian Express demonstrates the vulnerability of these vessels to even a single box catching alight, with the ship having to be abandoned as the stormy North Atlantic weather helped to spread the inferno.

And as the fragile islands of the Wadden Sea resembled a giant garbage dump, the questions about how 271 containers vanished over the side of one of the world’s biggest ships were reverberating. But with attention focussed on these casualties, many would have barely noticed the fatal sinking of a little bulker in the Black Sea, death and explosion off Hong Kong, where the authorities were already dealing with a sizeable spill of bunkers, visibly despoiling the blue sides of a containership alongside.

Chemical tanker ablaze off Hong Kong, one dead and 21 rescued

You might suggest that this regrettable series is just down to ill luck, or part of the warp and weft of maritime trade. But if you think about this rather more deeply, you might come to the conclusion that none of these accidents can be considered novel and that each of them indicates a long standing failure both of design and regulation. Take the conflagration aboard the vehicle carrier, its low decks packed with vehicles jammed together, all with fuel in their tanks, batteries connected and ready to be driven off at the port of disembarkation. You can design a certain amount of subdivision into these massive-multi-storey floating car parks, and fit fire suppression equipment, but experience has shown there are literally minutes available if the fire in one vehicle is to be contained, before spreading to those around it. Transmission of the fire above and below is also likely with the light-scantling decks that minimise weight in the high superstructure.

Are the designers and regulators making any progress here to make this class of ship any safer? Or is the priority to cram more cars aboard, better fuel economy and with crossed fingers, emphasise the rarity of such events, to discourage any regulations that might make these ships less viable?

As for the exceedingly regular fires in containers, it seems that we have been talking about this problem for ever, but that despite deaths of seafarers and ships and cargo destroyed, we are no nearer preventing these incidents, occurring, we are told, at a rate of one serious fire per month. There has been some progress in the regulatory regime in declarations of weights and contents, and the lines have been co-operating, but this has yet to demonstrate any real improvements.

You could probably do well by requiring cargoes subject to overheating to be carried in cold reefer boxes, but shippers of this hazardous stuff would scream blue murder. An appropriate reaction to this would be to point out that seafarers’ lives are more precious than cheap products and that such stuff has no business being shipped long distances by sea. But that won’t happen and IMO, wrestling with its environmental preoccupations, has been rather diverted from its primary task of improving marine safety. The embarrassment aboard the MSC Zoe and her escaping boxes also suggests that ship size is no guarantee of safety; not when you pile boxes eight or nine high on deck, and find yourself unable to keep them there on a coastal voyage in the North Sea. Enquiries are likely to focus on the stability of the ship and the lashing arrangements, as the box loss was not confined to just one or two stacks.

But the regulators might also consider the risks of expecting ships to arrive in port with containers unlashed and the contentious matter (taken up by the ILO) of using seafarers to lash and unlash cargo, which is properly dockers’ work. People with positions to protect will point to the statistical rarity of major box losses, but other less charitable souls will suggest that this, once again is a numbers game.

Watch - Video of damage to containers on the MSC Zoe

Fifty years ago, much concern was being expressed about the lack of safety in “one-compartment” ships, which in the event of water ingress, would be kept afloat only if the cargo was light. Goodness knows how many seafarers have since died in these little ships, in which there has been little improvement in resilience and survivability. Surely that ought to occupy rather more of the regulator’s and designers’ time. Or is the truth of this unfinished business is that improvement is just not affordable?

Will Congress intervene to prevent US rail strike?
Nov 30, 2022