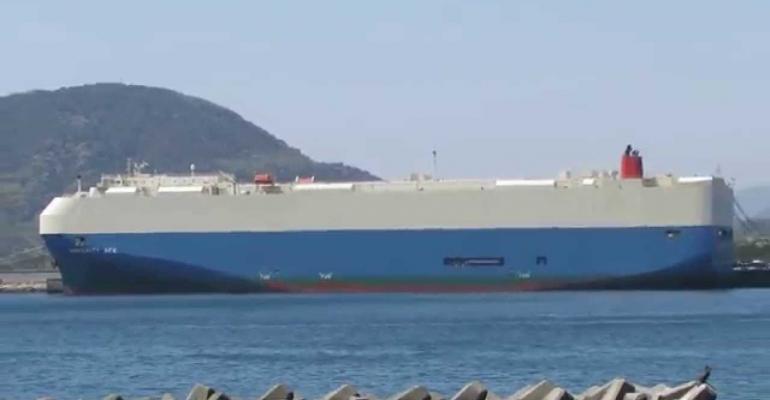 The search continue for two seafarers missing following a serious fire on board the car carrier Sincerity Ace while three others are feared dead.

A serious fire was reported by the Master of the Shoei Kisen Kaisha owned and managed, 2009-built car carrier on New Year’s Eve 1,800 nm northwest of Oahu, with an intention to abandon ship. The vessel is operated as part of Mitsui OSK Lines, MOL Auto Carrier Express (ACE) fleet.

The US Coast Guard (USCG) and five merchant vessels in the area came to the rescue and 16 crew members from the Sincerity Ace were rescued.

“We are thankful for the assistance the crews of these merchant vessels have given us during this event significantly reducing possible response time,” said Lt. Duane Zitta, Coast Guard Joint Rescue Coordination Center Honolulu. “Their quick actions provided for the rescue of 16 members of the crew who would otherwise still be in the water and are continuing to aid us.”

The search continues for two missing crew members while three other seafarers spotted in the water are feared dead. “Three of the five missing mariners reportedly were located but remain in the water as they are unresponsive and unable to grab onto life-saving equipment to be brought aboard,” the USCG said.

Search efforts are focused on the two remaining potential survivors in a search area of 5,832 nm sq.

A spokesman for the owner and manager said: "The company would like to express their gratitude to the Coast Guard and the crews of the 5 Good Samaritan vessels, Green Lake, SM Eagle, Venus Spirit, New Century 1 and Genco Augustus for assisting our crew. Our thoughts and prayers are with the crew and their loved ones during this difficult time."

Meanwhile the vessel is adrift on the high seas and is still on fire. “The owners of the Sincerity Ace are coordinating with the merchant vessels for the transport of the rescued mariners,” USCG said. “A salvage plan is being formalized and commercial tugs have been dispatched by the company.”

The spokesman for the owner and manager said cause of the fire was unknown at this time, but they would manager would work closely with all appropriate authorities to try and determine a cause.