Autonomous shipping - are we being blinded by technology? 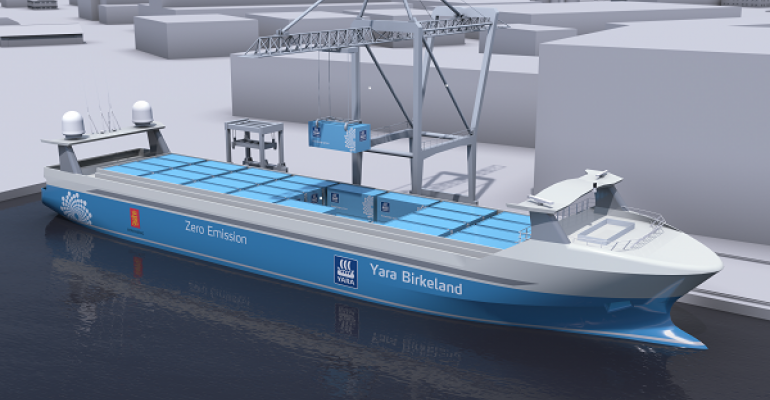 Autonomous container feeder Yara Birkeland
A complex operating environment will slow the development of autonomous shipping, and we should not be blinded by technology, a safety conference in Singapore was told this week.

Speaking at the [email protected] conference organised by the Maritime & Port Authority of Singapore (MPA), Allan Gray, president of the International Harbour Master Association (IHMA), noted that while technology gave great opportunities to enhance safety and efficiency of trade there were also some concerns.

Andrew Wong, Regional Manager (Asia Pacific) for The Institute of Marine Engineering, Science and Technology, noted that in a survey of its members only 20% believed “the technology providers know exactly what our industry needs when it comes to autonomous vessels”.

While technically possible the complex range of environments in which vessels operate and the fact that for many years unmanned vessels would have to operate in the same space as ones crewed by humans, makes the process to transition to autonomous shipping both long and complicated.

Caroline Yang, president of the Singapore Shipping Association (SSA), was blunt in her preference in dealing with predictable machines over humans in many cases. “If I don’t have to deal with humans I’m all for it. If I just have to deal with machines and there is predictability, and just have a few very strong personnel in the office and in the control room I’d probably sleep better,” she said in a panel session.

However, Yang, believed, when it comes to a business such as her own as ceo of Hong Lam Marine, largely operating bunker tankers in the busy port waters of Singapore, autonomous ships were not currently a viable proposition. “But personally for me in today’s time in today’s time with 5G technology, with the batteries, I really do not believe the complete autonomous ship is possible in my field. If you look at Singapore and the congested waters many decisions need to be made on the spot and I don’t think even with a five minutes lead time its sufficient,” she explained.

“For the ports where most of my ships are I think it really requires the experience and training of my officers on the bridge and my crew on deck. So that to me is not possible.”

A mixed environment - manned and unmanned

The mixed environment of both manned and unmanned vessels in which autonomous ships would likely have to operate for many years was highlighted as an obstacle to the adoption of automated shipping.

Maja Markovcic, executive director of the European Maritime Safety Agency (EMSA), said the situation was not black and white. “There will certainly be autonomous ships, but certainly not all ships will be autonomous. The hybrid environment is something we should focus on.”

She also noted that for long haul trades not all ports would be equally developed to handle autonomous vessels.

Gray said, “If I could go to bed tonight and someone flicked a switch and everything was automated tomorrow I would sleep easier. But the reality is that’s not going to be the case, we’re going to have a mix of autonomous and non-autonomous vessels, and that’s the complex issue we have to resolve.”

These issues were not just anti-collision protocols but also port infrastructure, with a terminal potentially needing to have both pilots and auto-docking solutions if it was handling a mix autonomous and manned vessels.

“What’s going to happen in the transition? If I have to have port that deals with 50 – 50 that makes to a very complex operating environment,” Gray said.