Completion of Suez Canal expansion inside a year 'astonishing' 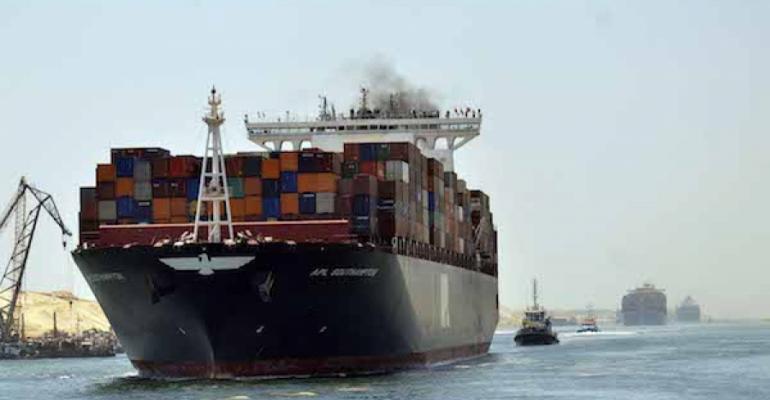 The International Chamber of Shipping (ICS) has called Egypt’s achievement in completing work on the New Suez Canal Expansion on schedule and inside one year ‘astonishing.’

“The impression we’re taking away is this is a huge undertaking and it has been completed in a time which is frankly astonishing,” said Peter Hinchliffe, secretary general of ICS and International Shipping Federation (ISF), on a visit to the canal on 30 July.

Vice Admiral Mohab Mameesh, chairman of the Suez Canal Authority, who met the ICS-ISF delegation, put the estimated cost of the canal expansion at $4bn, as well as another $4bn to be spent on construction of six new tunnels under the canal into the Sinai.

Egypt nationalised the Suez Canal on 26 July, 1956, to provide funding for the construction of the Aswan Dam. Annual earnings were then $35m. With revenues at $5.1bn in 2013, the expectation is that the expanded canal will attract vital hard currency dues of $13.2bn for Egypt by 2023.

“We promised, and we delivered,” said Mameesh, of the works to dig and dredge 72km of canal to create a partial parallel waterway that will reduce transit times from 18 to 11 hours. “President [Abdelfattah] El-Sisi will announce on August 6 that the canal is fully operational.”

Security for the ceremony will be tight, with 7,000 policemen and military personnel, many drafted in from outside locations, guarding the site of the Suez Canal Authority (SCA) headquarters in Ismailia for the event. Security forces will also be on high alert at access points to Ismailia governorate.

The speed with which the Egyptian army and two consortia of international dredging companies have executed the canal expansion has caused general surprise in the global shipping industry.

Initial trials on the new section of “double canal” took place as early as 25 July, involving the APL Southampton, the Maersk Cheerness, and the Bahrain-registered containership Mayssan. El-Sisi is keen to use the August 6 inauguration as a shop-window for the expanded waterway.

Although a majority of Egyptians were unhappy with the rule of Mohammed Morsi, the Muslim Brotherhood leader who served as Egypt’s first democratically elected president until his ouster by El-Sisi in 2013, many do not regard the reintroduction of army rule as a step forward for Egypt.

An Islamist campaign largely conducted against military targets in the Sinai Peninsula has underlined the need for progress in developing a hinterland area best placed to take the pressure off inundated population centres around the Nile and the Delta in this 90m-population country.

For this reason, almost half the $8.3bn budget for the New Suez Canal project is earmarked for six new tunnels, at least one of them for rail, under the canal, to connect the isolated peninsula, which is seen as a potential base for expanded manufacturing and agriculture, to ‘Egypt proper.’

"[We] desire to continue our dialogue [with the Suez Canal Authority] into the future. That is very important for us because we are representing the customers who will be using the canal in the coming years,” said Hinchliffe.