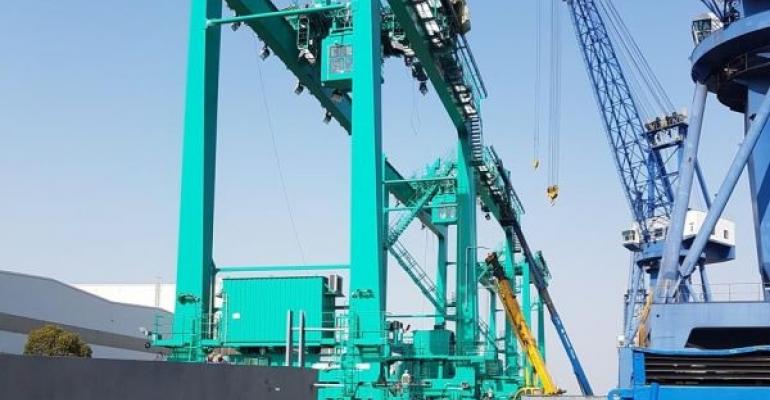 CCCC Shanghai Equipment Engineering (CCCCSEE) has selected Corvus Energy to supply the ESS for the battery-hybrid RTG cranes which will be a mix of new and retrofits, to operate in various ports in China.

The hybrid RTG port cranes are currently under construction by CCCCSEE and its affiliate ZPMC.

Unlike conventional conventional diesel electric port cranes, the hybrid version is powered primarily from the Corvus battery package resulting in fuel savings of up to 65%, according to Corvus Energy.

Hear from Geir Bjørkeli, Chief Executive Officer, Corvus Energy at the Sea Asia Conference 2019 in Singapore on the future of energy in shipping

“Corvus Energy has definitely shifted the economics and viability of converting diesel port equipment to battery-hybrid electric with their Orca Energy systems. Through previous deliveries they have proven that the performance, durability and reliability of its battery systems are ideally suited to the demands of our port equipment,” said Gao Jianzhong, chief engineer, CCCCSEE.

Corvus Energy has previously supplied its solution to 48 RTG cranes through CCCCSEE.

Find out more at the Oil, Shipping and the Future Energy Mix conference session at Sea Asia 2019 in Singapore

The stored energy is used to power the RTG crane during operations such as trolley and gantry movement, allowing the diesel engine to be shut off when it would traditionally be idling or operating inefficiently at low loads. The size of the generator can be smaller, the generator can be used less often and its operation optimized for fuel efficiency.

“There is significant retrofit potential with existing RTG cranes in global ports, in particular in Asia which operates half the world’s roughly 10,000 RTG cranes. Further, there is an upward trend for hybrid and all-electric RTG cranes in new orders.”

Jointly organised by UBM (Seatrade) and the Singapore Maritime Foundation, Sea Asia 2019 will take place in Singapore from 9 - 11 April 2019 at the Marina Bay Sands®.