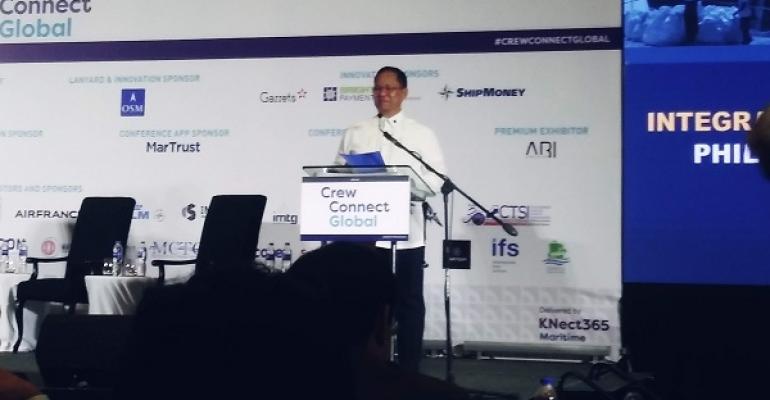 The elephant in the room at the CrewConnect Global conference in Manila this week was the Philippines failure to comply with the European Maritime Safety Agency’s (EMSA) standards for the implementation of the STCW Code and increasingly possible ban of Filipino officers.

The opening speeches at the conference under lined a dichotomy between the quality companies that attend such an event, and see a value in often impassioned discussions, on all aspects of safety, training and crew welfare, and a mass of training institutions in the Philippines geared at churning out seafarers with little apparent interest in whether they ever serve at sea or not.

The new Maritime Industry Authority (Marina) administrator Vice Admiral Narciso Vingzon Jr told the conference, “As a signatory to STCW the Philippines is subject to several inspections by the European Maritime Safety Agency between 2006 and 2017. In July 2017 Marina received the European Commission assessment report detailing 42 shortcomings under areas of national policies and provisions of requirements for certification, maritime administration and training institutions.”

He said Marina was “proud” to have submitted to the EC the actions and measures addressing the 42 shortcomings.

He was followed by International Chamber of Shipping (ICS) chairman Esben Poulsson who called for a thorough revision of STCW saying in its current form it was not fit for purpose with increasing number of owners opting for their own additional training and requirements.

It made for a stark contrast. On the one hand you have the Philippines government struggling to bring up to speed a seafarer training school system that churns out 25,000 to 30,000 graduates a year of which only 20% ever make it to sea to serve on an international vessel.

On the other you have the top level Philippines crewing agencies and international ship managers and owners in Manila, that have invested heavily in training and for who STCW is simply a basic standard, a pre-requisite for being able to walk through the door to apply for a job. The training these companies do clearly goes well beyond this as was easily demonstrated by the intensity you could see in seafarers we saw being trained on a simulator at V.Group’s facility in Manila on Thursday.

As one executive put it to me that they know which are the good schools and which are not and they only take graduates from the good ones.

However, should EMSA decide to ban Filipino officers from EU-flagged ships it will affect everyone, including the quality operators.

So will there actually be a ban? Well no-one really knows, but the situation has become complex and politicised given just how many years it has dragged on. European crewing nations such as Croatia clearly have something to gain if there is and can rightly point to the fact the Philippines has been given many chances to get its house fully in order.

Clearly there are those lobbying on the Philippines side, both industry and government, that things are moving and heading the right direction again. Indeed there were closed door meetings take place on the sidelines of the conference.

Talking to executives around the conference views were mixed. Some believe a ban is likely, although probably not till the first quarter of the next year, others believe the Philippines will scrape by…just…yet again.

Clearly Norway believe a ban is likely as they have contingency plans in place. Norway ironically employs the most Filipino seafarers in Europe, but is not part of the EU. If there is a ban there indications also that it will only be on new certificates, and not impact Filipino officers already serving on European-flagged ships.

However, if EMSA does impose some kind of ban, it leads to the question as to what will the IMO do. Can the IMO really be seen to stand by allowing the Philippines as a country on the white list if EMSA says it is failing to meet standards? Action by the IMO would have much more far reaching and serious implications for the industry as it would be global in nature.

If EMSA does impose a ban it would be understandable, after all 2019 would be the 13th year that the Philippines has been attempting to comply with its demands. But will it achieve in finally weeding out the institutions aimed more at making money than training seafarers, or just end up harming those seafarers who work for quality owners and managers that have invested substantially in raising the standards of the Philippines crewing industry?