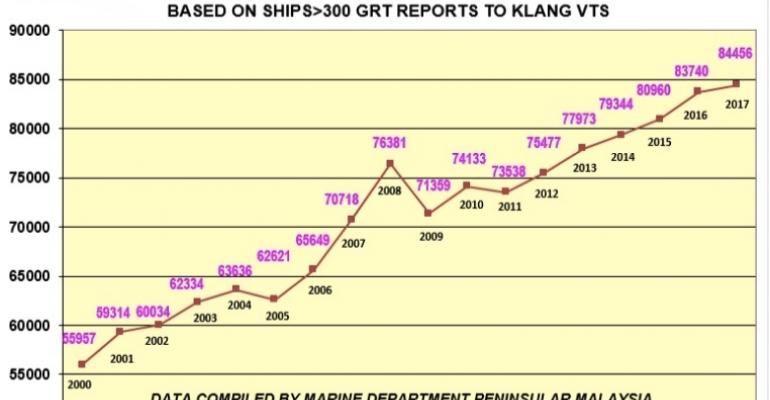 Defying difficult market conditions traffic in the world's busiest shipping lane, the Malacca Straits, continued to grow over the last three years hitting an all time high of 84,456 transits in 2017.

A report by Singapore-based Nippon Maritime Center (NMC), provided exclusively to Seatrade Maritime News, and based on figures from the Marine Department of Malaysia, showed that traffic had grown consistently since 2011.

“In the last three years, daily transit reports to Klang VTS increased from 222 vessels per day in 2015 to 231 vessels per day in 2017, despite challenging shipping market conditions,” the NMC said. This equates to nearly 10 vessels entering or leaving the straits every hour, or one vessel every six minutes.

The number of transits is based on reports by vessels over 300 gt to the STRAITREP system at One Fathom Bank in the north of the Malacca Strait and Iyu Kecil in the south where it meets the Singapore Strait.

Containerships, which remain the largest users of the strait accounting for around 33% of traffic, saw a slight dip in transits 24,446 vessels last year compared to 25,786 in 2016. However, the average number of containerships transiting the strait daily remains at about 70 despite rapid growth in the size of boxships on the trade with lines now deploying 18,000 – 22,000 teu megamax ships on the Asia – Europe trade. “Container ports in the Straits have been handling increasing number of containers in recent years,” the report noted.

Tankers, including VLCCs, are the second largest users of the straits accounting for 29% of traffic.

VLCC traffic in the strait has nearly doubled over the last decade to 6,711 transits last year compared to 3,753 in 2007, equating to 20 VLCCs a day. Over the last five years VLCC traffic has increased 7.8% annually. For small to medium sized tankers traffic has grown 3.8% annually over the last three years to hit 20,629.

Bulk carrier traffic in the strait saw a slight dip in 2017 to 15,411 transits from 15,547 in the previous year. “For the most part since year 2011, bulk carrier transit reports have been growing steadily at 6.0%, reflecting East Asia’s import of raw materials such as iron ore and coal,” the report commented.

“Sources of LNG and LPG cargoes are widely distributed around the world, and there are many routes that do not use the Malacca Straits.”