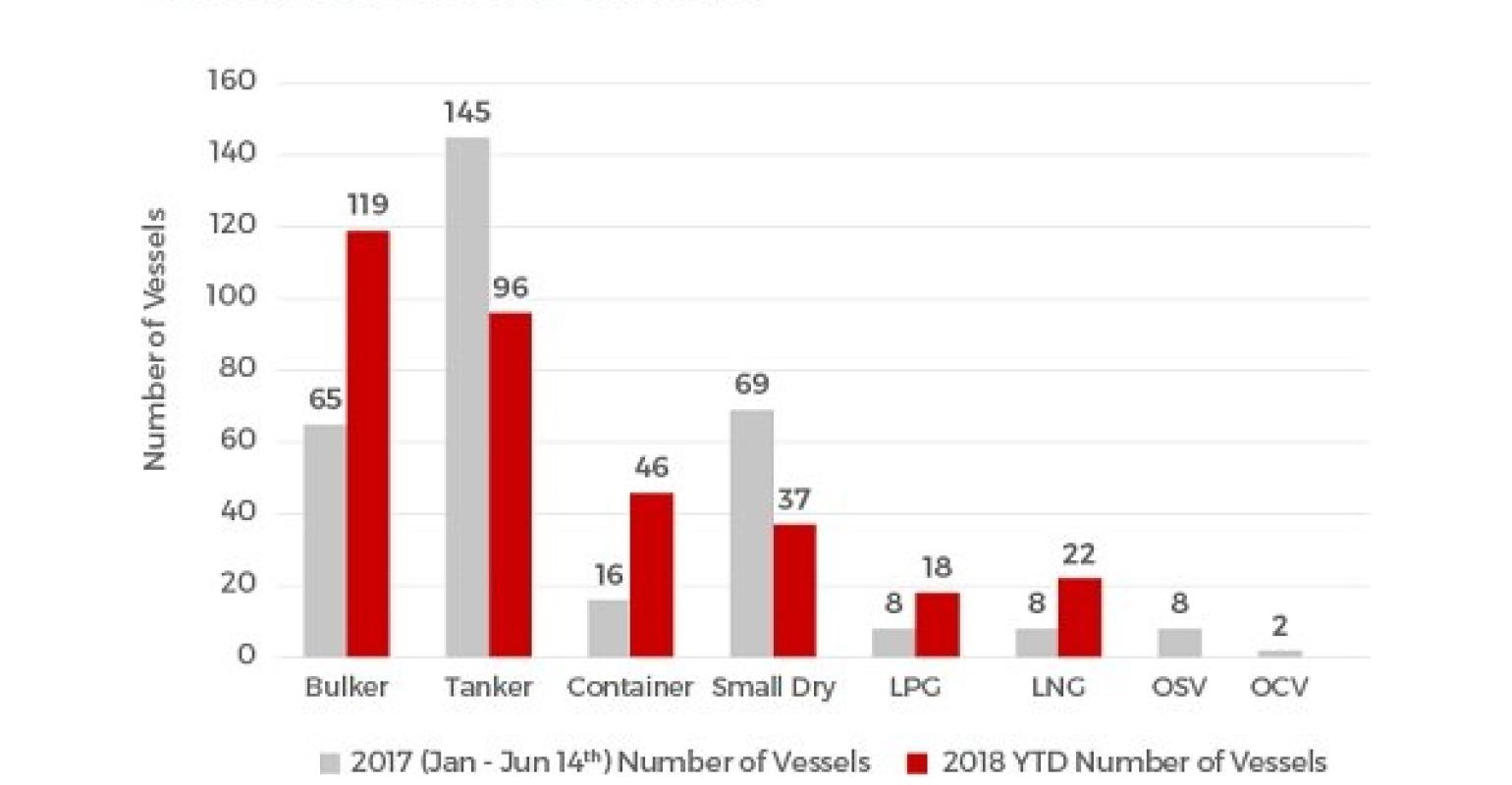 Newbuilding orders across most shipping markets have started to drop off after a whopping $10bn was committed in the first quarter of 2018, but the prevailing trends suggest little has changed from the boom and bust cyclical mentality of ship owners aided and abetted by the prevailing attitude of financiers, according to VesselsValue.

“The total committed to new deliveries is now the lowest since the start of 2016,” said VesselsValue analyst Court Smith, noting that “ordering trends in the start of the year were highest in the markets that were seeing the highest returns.”

VesselsValue figures (see chart) showed ordering was highest in the larger bulkers, container and gas carrier markets, while interest in the low earnings environment tanker markets was softer. Almost double the number of bulkers was ordered in the first half of this year compared to the previous corresponding period in 2017 while nearly triple the number of container ships was ordered.

“In one sense this highlights the short-term view that some investors take of the market. It still appears to be easier to secure financing for ships in a strong market as opposed to those that are suffering in the doldrums,” Smith astutely pointed out.

He further noted that “rising asking prices from shipyards are partially to blame in the downturn in new orders”. Higher costs such as rising steel prices and smaller workforces were blamed, while less willingness by the yards’ creditors to accept low margins was also cited as a contributing factor lower buyer interest.

“The slowdown in newbuilds is an encouraging sign that over-ordering may not be a significant issue,” Smith suggests optimistically. He notes that while some of the market segments have a large outstanding orderbook, most of these are offset by an equal number of ships on the water which are equal to their recycling value, or in other words potential candidates to be scrapped. “If orders remain between the $4bn to $8bn level through the rest of the year it should support the asset values of younger ships as well,” Smith said.

“The headwinds to global trade may give some owners pause in fleet renewal plans, especially in the container and dry bulk markets which would be directly impacted by the higher prices for consumer goods which would result from tariffs,” Smith said.

He added however that most shipping markets appear to be at their troughs or improving, which should encourage further investor interest in newbuilds.

“The shift in money being committed to the ships is a good reminder that the cyclical nature of the business remains intact,” concludes Smith.