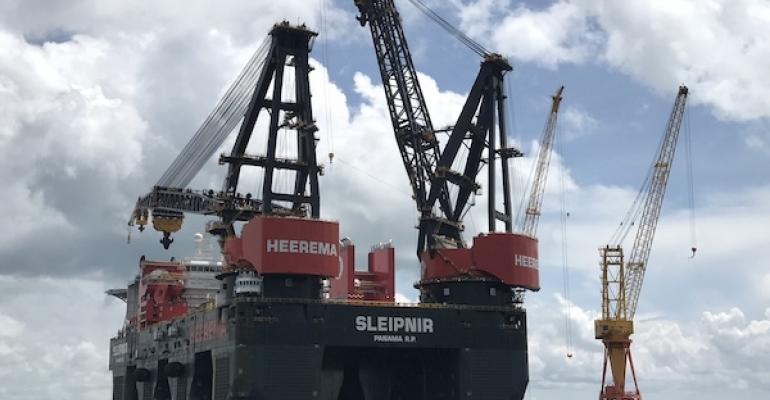 Named after Norse God Odin’s eight-legged stallion, the Sleipnir is the first SSCV to be able to run on LNG and/or marine gasoil (MGO) for the installation and decommissioning of offshore structures globally.

Last Thursday, Seatrade Maritime News visited Sembmarine’s yard in Singapore and boarded the Sleipnir to take a look at the newly completed vessel which is expected to depart Singapore in late-June.

Wong Weng Sun, president and ceo of Sembmarine, commented: “This vessel for us is of the highest value and highest engineering deliverables up until today. We believe that going forward, cleaner source of energy will be adopted and LNG will be the forerunner.”

Pieter Heerema, chairman of the board of Heerema Marine Contractors, said: “We believe that in five years’ time there will be a sufficient uptake in gas bunkering worldwide.” Clockwise from top left: the 200-men capacity dining area, the buffet salad counter, the kitchen, the wide variety of food and condiments. The pair of main cranes with a combined lifting capacity of 20,000 tonnes. The control deck for the DP3 heavylift vessel. Pieter Heerema, chairman of the board of Heerema Marine Contractors, onboard the Sleipnir.