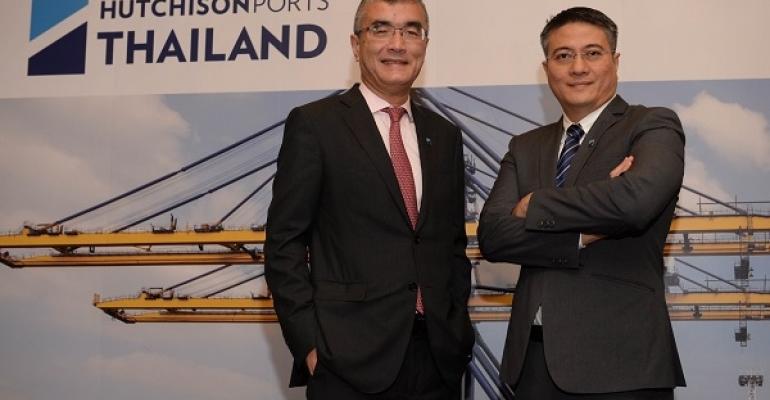 Hutchison Ports new terminal at Laem Chabang Port in Thailand when it fully completed by 2023 to 2024, will be the biggest terminal in the world to have fully remote controlled facilities.

As a global port operator with interests around the world Hutchison makes investment decisions based on a variety of factors and this was the case with its latest $600m investment in Terminal D.

“Whenever we have the opportunity to do so, it makes sense to do something new and better,” Hutchison Ports Thailand and Southeast Asia md Stephen Ashworth told Seatrade Maritime News. “Terminal D is a greenfield/brownfield site (and) it makes sense from a commercial and strategic point of view because you’re starting from scratch,” he added.

Based on his calculations using four conventional quay cranes at one of Hutchison Ports Thailand’s older terminals at Laem Chabang, Terminal C, compared with four remote controlled quay cranes at the new Terminal D, Ashworth estimated that the new terminal will have a 21% faster vessel turnaround time. He reiterated however that there are no plans to retrofit its other terminals, A2 and A3 as well C1 and C2, with remote control equipment.

This makes both commercial and strategic sense and alludes to the market Hutchison Ports is aiming at with its new facility. “On the commercial side we are 99% sure it makes sense,” said Ashworth, adding he envisages that by the time the full Phase 1 of the Terminal D project is completed by mid-2019, there will be six quay cranes which can work on a 14,000 teu vessel at one time. This will not only boost turnaround time and capacity, but also meet the needs of its clients, who have made increasing demands for these types of vessels to be serviced. When the initial part of the first phase D1A is becomes operational in early June, it will add 500,000 to 600,000 teu in extra capacity to Laem Chabang, Ashworth said. The completion of the full first phase will bring an additional 1.2m teu of capacity and when the final two phases, Phase 2 and 3 are completed by 2024, a total of 3.5m teu of capacity will have been added. This is timely Ashworth said, as the port is already close to its full capacity of 2.8m teu currently.

“Now is the right time to start operating Terminal D; from a demand and supply basis we’re doing fine,” Ashworth said. “Like many markets in Southeast Asia we’re going well,” he added, noting that its terminals saw 16% growth in 2017 and Hutchison Ports Thailand has a 33% market share in the country.

Ashworth said barring any issues such as a trade war, Hutchison Ports Thailand expected to see mid to high single digit growth “for the foreseeable future”.

Looking ahead, Hutchison Ports sees that greater use of remote controlled facilities is the trend in the port industry. Noting that Terminal D is not the first time the company has used remote controlled cranes, Ashworth said: “However Terminal D is the first where we have put everything together in one terminal”. He added: “Thailand will be our showcase in Southeast Asia.”

On further investments in remote controlled facilities at its Southeast Asian terminals, Ashworth said: “It depends on whether there is an allocation and it will be on a case-by-case, terminal-by-terminal basis.”

He noted: “This may be the industry’s future direction. I’m quite confident that this sort of technology will be part and parcel of our operating mode going forward.”

“If you want to stay ahead you’ve got to look at the market and what your customers want,” Ashworth concluded.