ICS on track to meet challenges of the future 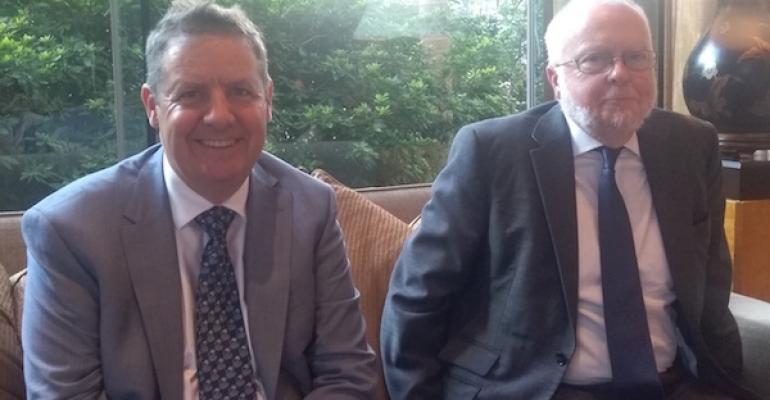 As the world of shipping changes much more rapidly than it has done before, the transition of leadership at the International Chamber of Shipping (ICS) is also about keeping up with that change.

Speaking to Seatrade Maritime News in Hong Kong as part of their swing through Asia, current secretary general Peter Hinchliffe and secretary general-designate Guy Platten emphasised two key themes: the importance of Asia and the need to prepare the organisation for the future.

While the final decision to open an office in Asia will only be made at ICS’ board meeting in September, and the location can safely be assumed to be among the three cities the pair was visiting on the trip, Tokyo, Hong Kong and Singapore, Platten pointed out that the more important point was a recognition of the need to have a presence in Asia in the first place and following on from that, a discussion on the role of the regional representation.

“It’s about growing the ICS presence, making sure that it reflects that we see the way trade is going in Asia and responds to that and is seen to be part of it,” said Platten.

Elaborating Hinchliffe pointed out that a lot of the work of the ICS involves putting forward shipowners’ views at the IMO. However, representation at the UN’s maritime body is at the government level and governments also need to hear directly from their own national shipping associations. The European associations have benefitted a little more from this to some extent because ICS is based in Europe, and this is something that is missing in Asia, he added.

Hinchliffe pointed out that while ICS often has informal conversations with the shipowner associations in Asia who are not yet members, part of the aim of establishing a presence in the region is to formalise this exchange so that their views are properly taken into account.

“The whole Asian Shipowners’ Association structure is fine for what it’s intended to do but it is not conveying that voice formally into IMO because they don’t have that avenue but we can give them that and I think we need to stress to them that they’re missing this opportunity to engage in this debate,” he stressed.

“They may very well be happy to go along with what ICS is doing but they are denying themselves the opportunity to influence where they want to,” Hinchliffe suggested.

“I think there are a lot of shared concerns with the big issues and recognition that we need to move forward as one,” Platten added. These included short to medium term issues such as the sulphur cap, as well as longer term ones such as greenhouse gas reduction.

“This is not a short-term project, it’s a long-term commitment and we need to get the fundamentals right. Rushed decisions never result in the best solutions so I think we’re taking the time to have those discussions and take it one step at a time; The sense I get is there’s definitely a consensus that we need a presence and now it’s how we take that forward,” said Platten.

ICS keeping in touch with shipowner interests into the future

Looking ahead to his first month at the principal international trade association for merchant shipowners and operators which begins today, 1 August, Platten quipped he was slightly glad that it would be right in the middle of the traditional summer lull and he would have time to ease into the role, to take stock and assess where the association is at.

“We have so many challenges in industry, and we always seem to be in transition but it seems the pace of change gets ever faster and it’s about how we adapt to that as an industry,” he said.

“Firstly you don’t want to lose the bits that are really good, and there are many of those but undoubtedly with the pace of change we have to make sure that the organisation is fit to embrace those changes and that’s all part of it. I shall see what’s coming over the horizon and make sure the organisation is ready for it,” Platten said.

“I don’t think any organisation can ever say we don’t need to change,” said Hinchliffe, highlighting the re-branding that ICS did last year and the sense that this had already started to put the organisation in good stead for the future.

“I am absolutely confident that Guy will find lots of efficiencies in the work process, which he’s got the good experience to deliver on,” Hinchliffe concluded.