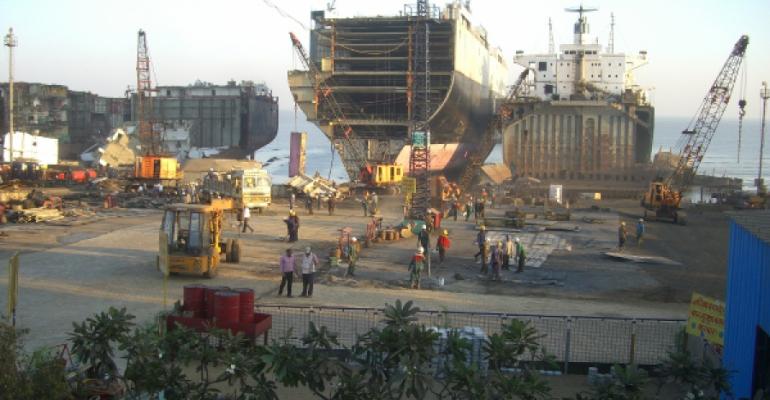 The four-day visit to assess the quality of Alang's beaching yards was attended by 14 Japanese representatives from government and industry, including the Japanese Shipowners Association, ClassNK and the Japanese Labour Union.

Four "leading" yards in the Alang region have upgraded their facilities to include concrete floors with drainage, bilge water pumps, hazardous waste disposal facilities and protective clothing for their workers. Brussels-based NGO Shipbreaking Platform believes that the improvements leave a number of problems with the beaching method unresolved.

Speaking to Seatrade Global, Ingvild Jenssen, NGO founder & policy advisor stated, "As long as the primary cutting takes place in the intertidal zone where the ship’s hull will be cut vertically and the cut-off blocks will be dropped and dragged up to the beach, pollutants, including residue oils and toxic paint chips, will be released to the sediments and sea water and washed out by the tides. Further, no cranes can be safely operated in the intertidal zone during primary cutting, thus large steel parts will crash in an uncontrolled manner onto the beach. The gravity method is at least poor working practice, at worst deadly."

For its part, NGO Shipbreaking Platform believes HKC compliance is not the strongest accolade for a yard. "We have criticised the HKC for rubberstamping current substandard practices and the EU has rightly set higher requirements for containment of pollutants and safe working practices that the beaching method will not be able to meet. The EU requirements further do not stop at the gate of the recycling yard as does the HKC – proper downstream waste management is required to become an EU approved ship recycling yard. As long as for example asbestos is sold on the secondhand market in India – as is current practice in Alang according to the Gujarat Maritime Board – hazardous waste from ships continues to put not only the life of workers at shipbreaking facilities in danger, but also surrounding populations."

Japan is moving towards providing Official Development Assistance to the ship recycling sector, to further improve yards and operations in the area, although that assistance is subject to further discussion in Japan.

Tamura stated: “We have a strategy that includes the Japanese government supporting Indian yards to upgrade and also for ClassNK to support these yards through consultancy services and ultimately certification. Japanese ship owners will be willing to send their ships to 'safe and environmentally sound' ship recycling yards in India and other countries and the entry into force of the Hong Kong Convention is a very important step to realising this goal. Our ultimate purpose is to help all concerned to move towards accession to the Hong Kong Convention and all our efforts will be focused in this direction."

While Jenssen welcomes the intended support, she believes that the Indian yards should be held to the same standards Japan enforces on its own shores. "Japanese public spending should not be invested in practices that put people and the environment at risk, nor should it succumb to the shipping industry’s sought for cheap waste disposal. It is fully possible to dismantle ships using slipways, piers or drydocks also in India, and Japanese investments should be looking at how to bring India up to a level which would satisfy also Japanese standards for environmental protection and occupational health and safety."