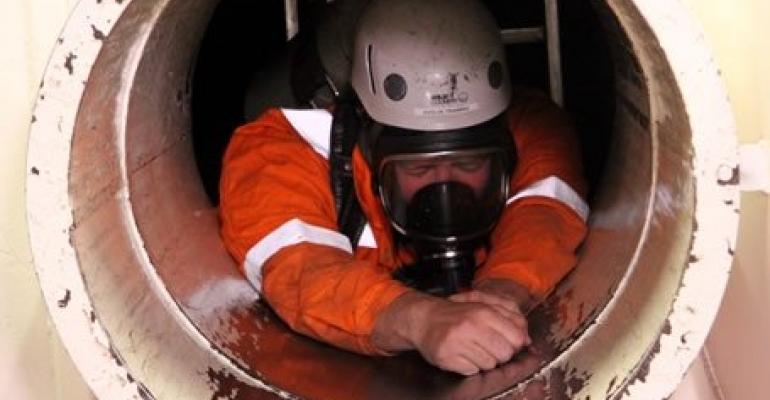 The majority of deaths in enclosed space accidents on board vessels occur due to ill-attempted rescues according to the UK P&I Club.

The dangers of enclosed space accidents are a well-known, and preventable if the proper risk procedures are carried out, however, they continue to happen.

At a loss prevention seminar in Singapore last week the mutual insurer highlighted that 60% of the deaths in enclosed space accidents come not from the initial incident, but from unplanned rescues where the proper precautions are not taken. The Club presented a case study on board a tanker in which the Master died attempting to rescue a cadet in a tank cleaning incident, while the cadet survived.

“When you take a shortcut you are putting someone else at risk,” said Anuj Velankar, senior loss prevention advisor (Singapore) for the UK Club. “Most die attempting an unplanned rescue.”

The human element is a very major factor in ship board accidents particularly if viewed in terms of cost. While crew injury accounts for 11% of claims and illness 20%, claims related to people are by far the biggest in terms of cost or quantum according to UK Club loss prevention director, Stuart Edmonston.

Another type of incident involving the human factor are bunker spills, which while fortunately not resulting in injury or death to the crew, can prove to be extremely costly to the owner.

“They continue to happen and they’re expensive, and getting more expensive,” Edmonston stated. Putting into perspective just how expensive bunker spills can be three spills in the US worked out an average of $1m per each cubic metre of oil spilled.

Adding to the financial cost with the criminalisation of seafarers an increasing number of jurisdictions are now seeking to arrest the Master in the case of the spill. “It’s the blame culture,” he said.

As every day operations spills should not be happening, and result in a failure to follow procedures. “Generally it’s down to that horrible term the human element,” he said. An aggravating factor is that bunker operations are often carried out at the same time as crew changes, as can happen in the Singapore both the world’s largest bunkering port and popular location for crew changes.

In an effort to address the human element in incidents the UK P&I Club is working with Canadian-headquartered aviation training company CAE. In the commercial aviation industry the flight crew verbalise all their actions, and the culture is such that junior crew can always challenge senior officers if they see a mistake is being made.