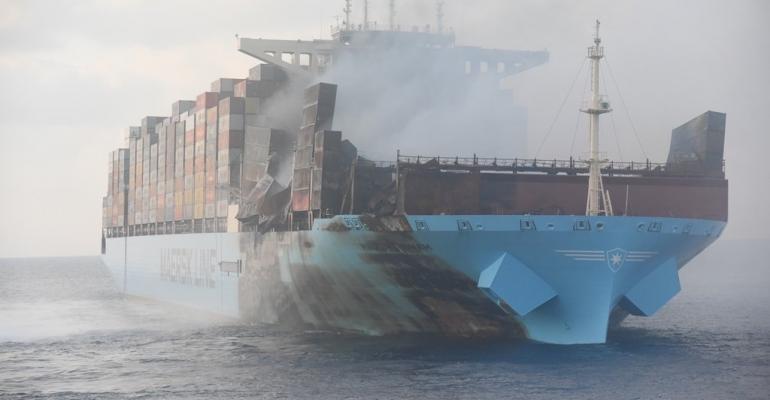 As the Maersk Honam finally berths nearly two months after a serious fire on board the vessel Meditterranean Shipping Co (MSC) is charging its customers extra if they want their cargo to reach the final destination.

The Maersk Honam, which suffered a serious fire on 6 March while headed from Singapore to Suez, was due to berth on Tuesday having been at anchorage in Jebel Ali since 23 April while hotspots on the vessel were extinguished.

Maersk Line 2M alliance partner MSC is asking customers with containers on board the vessel, which were not destroyed in the blaze to an additional $750 per teu and $1,250 per feu for additional transhipment and storage costs.

“In consideration of the important geographical deviation provoked by the salvage operations and of the consecutive extra handling/storage costs that will accrue at port of refuge, MSC will unfortunately not be in position to carry your cargo to destination without collecting additional charges,” the company said in a circular customers.

The shipping line said it was “profoundly sorry” for the additional costs.

Read more about the Maersk Honam and container fires:

Shippers who do not accept making the payment will be deemed that the voyage terminated in Jebel Ali and handed back to local representatives and will be subject to payment for storage and demurrage as per MSC's tariff. Customers have until 1800hrs on 24 May to give their decision to MSC, after which time if no decision is received the voyage will be deemed terminated.