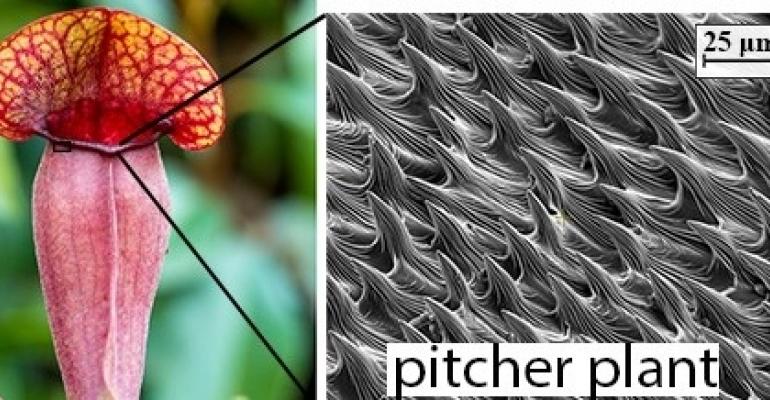 Nanotechnology research has resulted in a potential new environmentally-friendly solution to the age-old problem of biofouling.

Inspired by the characteristics of pitcher plants, which inhabit rainforests and swamps, a team of chemistry researchers from the University of Sydney Nano Institute has developed nanostructured surface coatings that have anti-fouling properties without using any toxic components.

Research team leader Associate Professor Chiara Neto, said: “We are keen to understand how these surfaces work and also push the boundaries of their application, especially for energy efficiency. Slippery coatings are expected to be drag-reducing, which means that objects, such as ships, could move through water with much less energy required.”

On ships' hulls, biofouling results in an increase in roughness, turbulence, and extra weight. If not properly protected, marine fouling can reportedly add up to more than 150kg per square meter in only six months at sea. Not only does biofouling add weight, it also leads to a significant increase in hydrodynamic drag and this can increase fuel consumption by as much as 40% to 50%.

The problem is serious enough to have been recognized by the IMO and is reflected in the 2016 Guidelines for the development of a Ship Energy Efficiency Management Plan (SEEMP) (resolution MEPC.282(70)). There are also concerns about the spread of invasive species through biofouling.

Since the banning of the toxic anti-fouling agent tributyltin, the need for new non-toxic methods to stop marine biofouling has been pressing.

The new coating uses ‘nanowrinkles’ inspired by the carnivorous Nepenthes pitcher plant. The plant traps a layer of water on the tiny structures around the rim of its opening. This creates a slippery layer causing insects to aquaplane on the surface, before they slip into the pitcher where they are digested.

The research has been published in ACS Applied Materials & Interfaces. It shows that the slippery surface developed by the group stops the initial adhesion of bacteria, inhibiting the formation of a biofilm from which larger marine fouling organisms can grow.

Biofouling can occur on any surface that is wet for a long period of time, for example aquaculture nets, marine sensors and cameras, and ship hulls.

The new materials were tested by being tied to shark netting in Sydney’s Watson Bay, showing that the nanomaterials were efficient at resisting biofouling in a marine environment.

The antifouling coatings are mouldable and transparent, making their application ideal for underwater cameras and sensors, which could be applicable in the offshore marine sector as well.