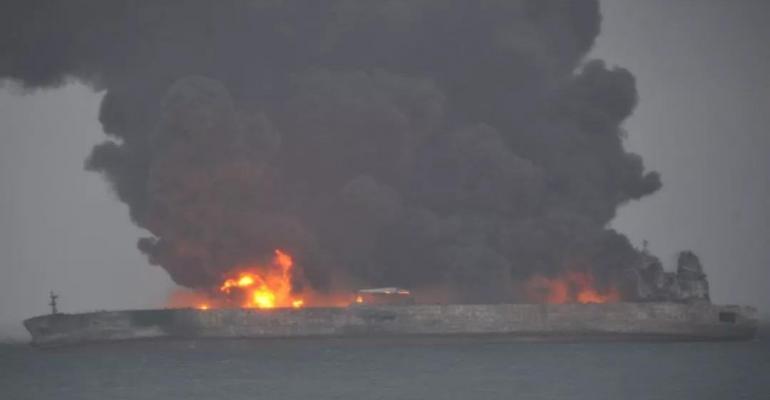 NITC says the tanker Sanchi ablaze off Shanghai is unlikely to sink, as rescue service try and contain the fire.

The blaze onboard the suezmax Sanchi continued to rage on Tuesday following its collision with the bulker CF Crystal on Saturday evening 160nm off Shanghai. The Chinese Ministry of Transport said heavy rains, strong winds and waves of up to 4m continued to hamper efforts to bring the fire under control.

However, owner NITC said it was “unlikely that it sinks”, Iranian news agency Shana reported. The possibility the vessel could explode or sink has raised fears of an environmental disaster from its 136,000 tonne oil condensate cargo.

So far the body of one of the 32 crew onboard tanker has been recovered. Sirous Kianersi, NITC managing director said that they had been unable to identify the seafarer. The other 31 crew remain missing.

Giving some hope of survivors he said: "The found body was wearing a life jacket which shows the crew have had enough time to use such equipment."

Two NITC vessels together with another one belonging to the Islamic Republic of Iran Shipping Lines have been dispatched to help in the search and rescue effort.