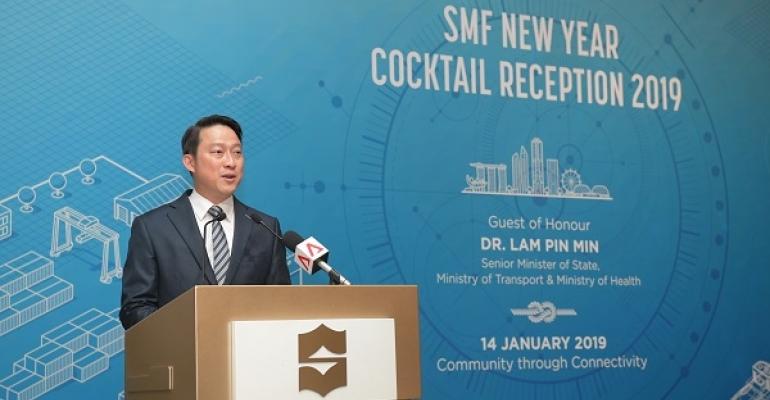 The strong growth in container volumes in 2018 was revealed along with other port performance figures by Lam Pin Min, Senior Minister of State for Transport and Health, at the Singapore Maritime Foundation New Year cocktail reception on Monday, who said, that 2018 had been a “year of uncertainty”, but, “Thankfully, Maritime Singapore fared not too badly.”

Other port numbers did not show the robust growth of 8.7% growth in container volumes with most either steady or marginally lower than 2017. Total cargo throughput was up slightly at 630m tonnes last year compared to 627.7m tonnes a year earlier.

Singapore remained the world's largest bunkering port in 2018 although the volumes sold in the port slipped to 49.8m tonnes compared to 50.6m tonnes a year earlier.

Minister Lam noted that Singapore continued to attract top players with Thenamaris setting up a commercial ship management office and the World Shipping Council announcing it would be setting up its Asia office in the Lion City.

Meanwhile he said that companies already continued to expand with China Cosco taking over Cogent Logistics and CMA CGM’s plans to consolidate CNC Line’s intra-Asia into APL in Singapore.