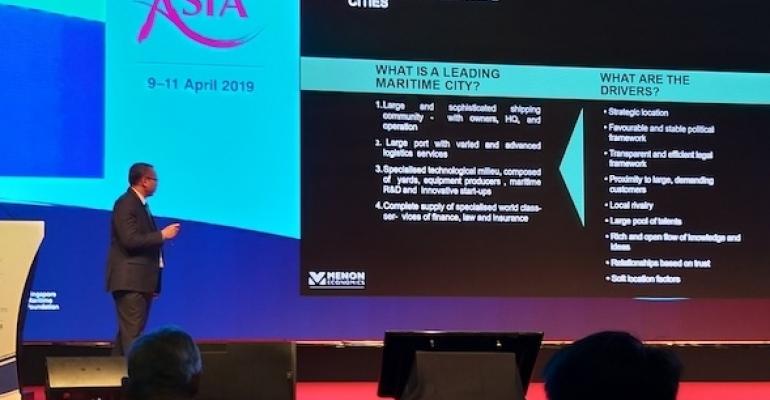 Singapore has once again topped the ranking of maritime capitals, and the city state is expected to be the most likely to remain among the five leading maritime centres globally in the future.

The Leading Maritime Capitals report for 2019, compiled by Menon Economics and DNV GL, saw Singapore in top position at the head of 15 major cities despite uncertain conditions in global trade and weak offshore oil and gas markets.

“Maritime Singapore’s continuous effort to strengthen its attractiveness as an international maritime centre has been well received by the industry. The strong results on both the objective indicators and expert assessments indicate its relevance as a critical node within the maritime sector regionally and globally,” said Shahrin Osman, regional head of Maritime Advisory, DNV GL.

Hamburg came in second in the ranking while Rotterdam and Hong Kong moved up to third and fourth respectively - showing significant improvement. London and Shanghai came in fifth and sixth.

Out of the five key factors on which the maritime capitals were judged, Singapore topped the rankings for three which were shipping, ports and logistics, and attractiveness and competitiveness. For the other two key factors, London topped for maritime finance and law, while Oslo led the pack for maritime technology.

Oslo stood out as the main centre for ocean technologies and solutions compared to Singapore, Copenhagen or Rotterdam, Menon Economics partner Erik W. Jakobsen explains but in the overall ranking, it fell from third spot to the seventh spot.

Looking ahead, the experts behind the ranking expect Singapore to retain its top ranking five years into the future but with stronger competition from Shanghai, and Dubai poised to climb into the top five overall by 2024. Meanwhile, Hamburg, Rotterdam, London and Oslo are expected to remain strong in Europe.

In addition to objective indicators, subjective indicators used in the rankings reveal the perception and assessment of each city as seen by selected business executives across the world, primarily shipowners and managers. Of the 200 experts called upon to respond to the survey, around 40% are based in Europe, 30% in Asia and the remaining 30% in America, the Middle East and Africa.