Tackling the talent crunch in maritime 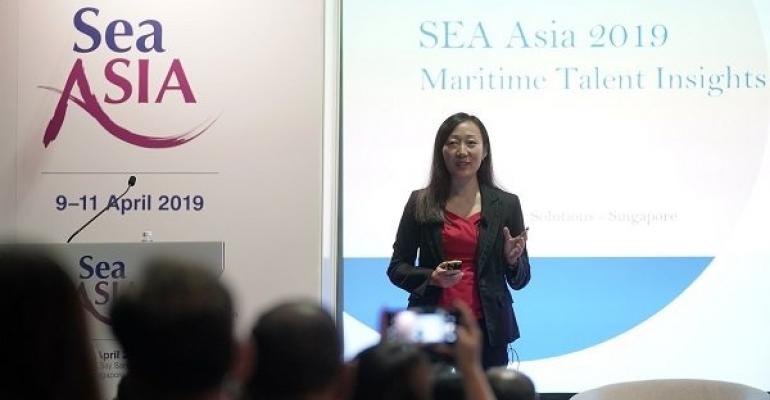 Even as the maritime industry moves to keep up with the pace of technological change, hiring and keeping talent has been a challenge.

"Digitizing to stay relevant," has been a catch phrase for the maritime sector in recent years and demonstrating that resolve, 24% of marine hires were from the technology sector in the last year and the proportion of such hires were up 14% year-on-year, LinkedIn's Head of Talent Solutions, Singapore, Elsie Ng says.

"Tech and engineering related jobs are most in demand," Ng said in a panel discussion on the Future of the Maritime Workforce at Sea Asia 2019. But hiring has failed to keep pace with demand.

For software engineer roles, there was 3.5 million talent available, according to LinkedIn data. Of that number, 1.6 million was in Asia and that number was further reduced to 600 for the Asia maritime sector. Around 18% changed jobs in a year.

The picture is not much better for data scientist roles, with 552,000 talents on a global basis. Of that number, 150 talents are in the Asia maritime sector and 44% changed jobs over the past year.

To tackle the skills gap and retain talent, Ng says that the maritime industry may want to consider hiring professionals with foundational skills and train them and to look overseas for talent at places such as France and India.

She also suggests looking for talent from other sectors, pointing out that several maritime sector professionals had their beginnings in other industries.

Even others in the panel agreed that more should be done to attract job seekers to the maritime industry.

Saying that the industry needs to be more proactive in attracting talent fresh from universities, Oyvind Stordal, Wllhelmsen Ship Management's Vice President Digital says, adding "there was free pizza" when he was young as an anecdote for the ways the industry tried to recruit new entrants.

Captain Nicholas Hall, General Manager, Marine Manning, Swire Pacific Offshore adds that there is not enough visibility on shipping unless there is a disaster and the industry can do with more career fairs.

But all agreed that the sector is getting more dynamic in its efforts to attract talent, including women.

In anecdotal evidence panel moderator Guy Platten, International Chamber of Shipping Secretary General, says he has done his part and his daughter is a Captain.

He added that the industry should highlight the good points such as that the average person spends only eight years at sea and it is not career at sea.