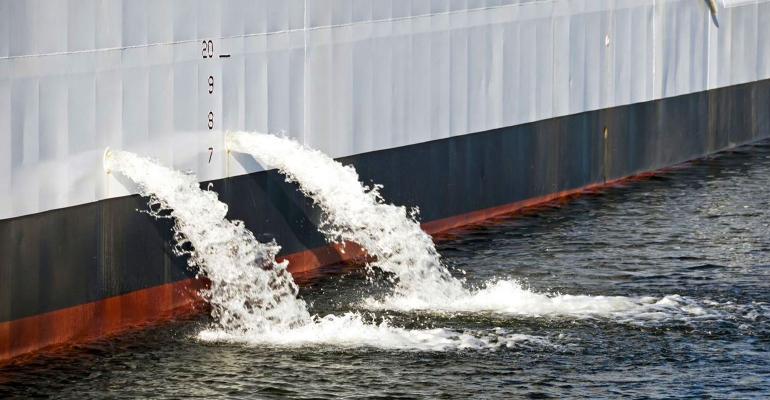 Ahead of the BWMTech conference in London we spoke with Dr Theofanis Karayannis to ask him some questions about the Marine Environment Protection Committee, and what we can expect to see from PPR 7 and MEPC 75.

Dr. Theofanis Karayannis joined the Marine Environment Division of the IMO Secretariat in March 2014, and since August 2017 holds the position of Head, Marine Biosafety, being in charge of biosafety-related topics (ballast water management, anti-fouling systems and biofouling management), and the focal point in the IMO Secretariat for the BWM and AFS Conventions and the Biofouling Guidelines.

He is also the IMO Secretariat's focal point for various ongoing activities, including inter-agency partnerships, related to marine biosafety. Prior to joining IMO he worked for Lloyd's Register, as a Senior Specialist in the Strategic Research and Technology Policy Group, and prior to that he held a position in the Marine Pollution Prevention and Cargoes Department of the Greek National Maritime Administration.

He also has previous experience as a naval architect and marine engineer at a ship design firm; as a university researcher; and as a lecturer at a seafarers' training academy.

Ahead of the BWMTech conference in London, 9 - 11 December 2019, we spoke with Dr Karayannis to ask him some questions about the Marine Environment Protection Committee, and what we can expect to see from PPR 7 and MEPC 75.

Read the transcription of our conversation below.

Iain Gomersall: MEPC 71 established the Convention’s EBP to allow a systematic and evidence-based review of the Convention. Have there been urgent issues identified to date?

Dr Theofanis Karayannis: Indeed, the experience-building phase associated with the BWM Convention (EBP) is intended to allow a systematic and evidence-based review of the Convention. This will be achieved through the consideration, by the Marine Environment Protection Committee (MEPC), of findings from the analysis of information submitted by Member States in accordance with the approved data gathering and analysis plan (BWM.2/Circ.67/Rev.1).

The IMO Secretariat, which is administering the EBP and will be submitting the data reports to MEPC, has not received any data from Member States yet, although we are aware of at least a few Member States that are preparing submissions, which we hope to start receiving soon. Therefore, no urgent issues have been identified through this process to date.

However, in the meantime, MEPC 73 has approved the output "Urgent measures emanating from issues identified during the experience-building phase of the BWM Convention" to allow prompt consideration of any issues that are deemed to impact the effective implementation of the Convention and should therefore not be dependent on the EBP’s timeline.

Issues already identified under this output that are currently under consideration at MEPC and/or the Sub-Committee on Pollution Prevention and Response (PPR) include: development of a standard for the verification of ballast water compliance monitoring devices; possible revision of the guidance for the commissioning testing of ballast water management systems (BWM.2/Circ.70); and the application of the BWM Convention to specific ship types that may face practical challenges in complying with certain provisions of the Convention.

Q: There is a movement towards specific outputs from MEPC 73 onwards, why is that?

DrTK: It is the normal and appropriate way the IMO works. All matters are considered under specific approved outputs with defined scopes. This allows structured deliberations with clear objectives and expected outcomes.

It was, in fact, an exception to this established practice that, for a number of years, matters related to ballast water management were allowed to be considered in the MEPC without specific approved outputs. This was done with the aim of facilitating the BWM Convention’s entry into force, by allowing flexibility to resolve any issues and concerns identified by Member States and industry following the Convention’s adoption. This aimed to instill confidence that would enable Member States to ratify the Convention.

Since the Convention’s entry into force in September 2017, the focus has been on its uniform and effective implementation and enforcement, and this requires targeted discussions on specific matters that may be identified to affect this goal. Therefore, the move towards specific outputs on ballast water management is merely an alignment with standard practice.

Q: Was there a reason for the transition from guidelines to a mandatory code for the approval of ballast water management systems?

DrTK: The guidelines for approval of ballast water management systems (G8) were revised in 2016 with the aim of making the testing and approval regime more robust by addressing any issues identified from the installation and operation on board ships of systems approved under the previous guidelines.

However, at the same time, it was recognized that IMO guidelines are by nature non-mandatory, which may lead to their inconsistent application across different Administrations.

Since the approval of ballast water management systems was deemed to be a very important aspect of the effective implementation of the BWM Convention, it was agreed that it should be regulated through mandatory provisions that would be enforced by Member States, ensuring the required consistency and effectiveness of the testing and approval regime.

Q: What topics can we expect to be discussed at PPR 7 and MEPC 75?

DrTK: Discussions at any IMO Committee or Sub-Committee meeting are primarily dependent on written submissions received from Member States and international organizations. It is therefore too early to have the full picture as the submission deadlines have not passed for either meeting. However, there may always be some known or expected topics based on relevant decisions of previous meetings, ongoing discussions, or early submissions.

PPR 7 is expected to consider, inter alia, proposals on the aforementioned development of a standard for the verification of ballast water compliance monitoring devices and the possible revision of the guidance for the commissioning testing of ballast water management systems, as well as revised guidance on ballast water sampling and analysis and on methodologies that may be used for enumerating viable organisms.

Topics to be considered by MEPC 75 are expected to include, inter alia, the aforementioned revision of the guidance for the commissioning testing of ballast water management systems (as an urgent matter emanating from PPR 7); the application of the BWM Convention to specific ship types as discussed above; updated information on the implementation of the EBP; the outcome of the 39th meeting of the GESAMP-BWWG, which considered six applications for approval of ballast water management systems making use of active substances; and any other outcome of PPR 7 that may be considered urgent.

All other outcomes of PPR 7 will normally be considered by MEPC 76.