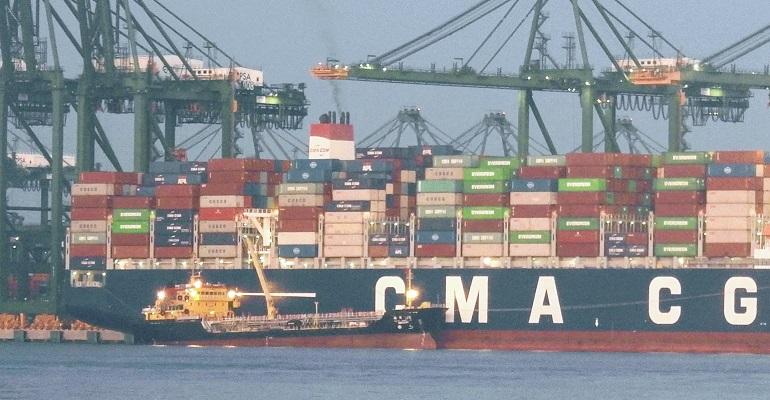 Bunker prices have broken through the $1,000 per tonne mark in Fujairah and more refuelling hubs look set to follow this week.

Record breaking prices for VLFSO come on the back of a dramatic surge in oil and gas prices in early trading on Monday morning.

Brent crude peneaked at $139 before easing back while gas prices set a new record of 800p per therm, smashing the previous high of 485p per therm by a huge margin. The spectacular spurt in prices followed news that the US is leading talks to ban the import of Russian oil and gas, a move that would hit EU countries hardest.

Fujairah is the first major bunkering port to cross the $1,000 mark according to figures from Ship&Bunker. Corresponding VLSFO prices in Singapore also surged to $981 per tonne having eased back to $892.50 on Friday.

Scrubber-fitted vessels save close to $250 per tonne

The differential between VLSFO and heavy fuel oil continued to widen last week, according to Ship&Bunker figures, favouring owners who opted for scrubber installations. A global average of VLSFO prices in 20 bunkering ports jumped 12% on Monday $962.50 per tonne. Meanwhile, heavy fuel oil prices pushed up to $714.50, an increase of less than 11% for the global ports average.

This represents a significant price spread of $248 per tonne on average between VLFSO and HFO, representing a handsome cost saving for scrubber fitted vessels.

By late afternoon yesterday, London time, Brent crude had fallen back to $122.50 and West Texas Intermediate was trading just above $117.50. Experts said the extreme volatility over the day was a clear indication of deep unease about the global energy backdrop. The general view is that prices will continue to climb, constituting a key factor likely to knock several points off global growth this year.

Meanwhile, oil importing countries have been disappointed at the outcome of last week’s OPEC+ meeting in which the cartel members, including Russia, opted for no change on their existing plans to increase oil supply only marginally over time. It appeared that the decision to stick to current strategy had already been taken. With a duration of less than 20 minutes, the meeting was one of the shortest on record and the Ukraine crisis was not even mentioned.