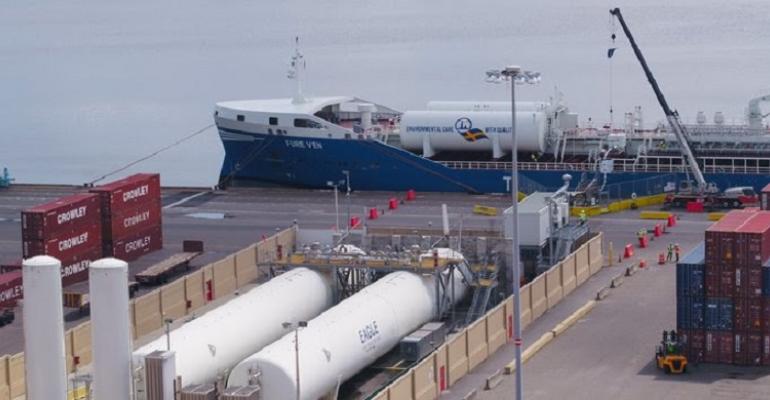 Swedish-flagged vessel Fure Ven became the first foreign-registered vessel to be bunkered in the US with LNG during a call at JAXPORT's Talleyrand Marine Terminal.

The dual-fueled vessel owned and operated by Furetank of Donsö, Sweden, has become the first non-US flagged vessel to bunker LNG in the United States. Eagle LNG Partners, a pioneer in small-scale LNG and an LNG bunker supplier, is the first company to deliver LNG bunker fuel to a foreign flagged vessel.

This milestone paves the way for more international trading vessels to bunker at the Jacksonville Port Authority (JAXPORT). marking the latest tangible demonstration of LNG as a safe and reliable fuel solution to meet the increasingly stringent environmental regulations and still generating substantial cost savings.

Eagle LNG Partners safely transferred 225 metric tonnes of LNG to the vessel from their on-site storage facility, with the bunkering evolution taking less than seven hours to complete. The tanker was laden with renewable diesel cargo for Preem, the largest petroleum and biofuels company headquartered in Sweden.

“As a pioneer in LNG bunkering and a global leader in small-scale LNG, the team at Eagle LNG is proud to have partnered with the trailblazers at Furetank and GAC, along with numerous crucial stakeholders including JAXPORT, Crowley Maritime and the US Coast Guard, to safely accomplish this first-ever LNG bunkering of a foreign flagged tanker in the United States. It is only fitting that this first bunkering in the United States happen in Jacksonville where JAXPORT, local officials and the community have embraced the shipping industry’s transition to the more sustainable, affordable LNG,” said Sean Lalani, president of Eagle LNG.