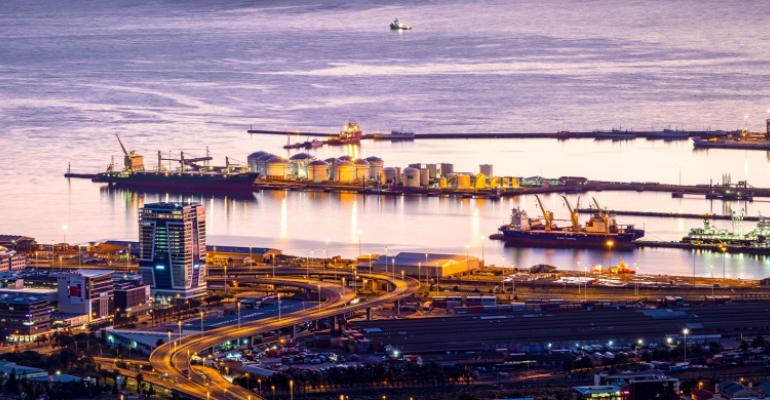 Investigating marine fuel trends, quality, and operational issues the marine industry has faced since the implementation of IMO 2020.

Since January 2020, the global cap on sulphur content in marine fuels was introduced through the IMO 2020 regulations.

While one cannot deny the benefits in reducing sulphur content of marine fuels, the impact of these regulations and the changes they bring to the marine fuels and shipping industry has brought uncertainty and challenges.

With experience under the belt, and backed by numbers, Tracy Wardell (Global Technical Manager at Intertek Lintec) shared her thoughts at CMA Shipping on fuel quality and the types of issues the marine industry has faced since the implementation of IMO 2020.

“It’s important to highlight the variability of these fuels,” says Wardell. She notes marine fuel quality trends, the expected fuel quality issues, and operational issues that occurred vary quite drastically. Whilst the discussion will be on VLSFOs, we shouldn't forget about ultra-low sulphur gasoil, as this is still a major component in the marine field market.”

“Firstly, in examining the overall fuel quality in recent times based on both the percentage of samples tested and found to be above the ISO limit but falling within 95% confidence interval, and the percentage of samples deemed to be of specification (those greater than the 95% confidence limit), in 2018 we saw an average of 9.7% of samples being above the ISO limit and 6% being classed as of specification.

During 2019 we saw a slight improvement with 8.6% being both the ISO limit and 5.8% being clusters or specification.

Wardell notes that as the industry was approaching a legislative change, these figures were very positive because past legislative change had often resulted in a negative impact on fuel quality as the legislation date approached. Looking at what happened in 2020, there had been a marked reduction in the percentage of samples, both above the ISO limit and being deemed as of specification, with off spec accounting for around 4%.

Does this mean the industry is experiencing the best quality of marine fuels it ever has?

“It's worth looking at the landscape of the fuel market according to the information and samples received and tested by Intertek Lintec across our laboratories.” 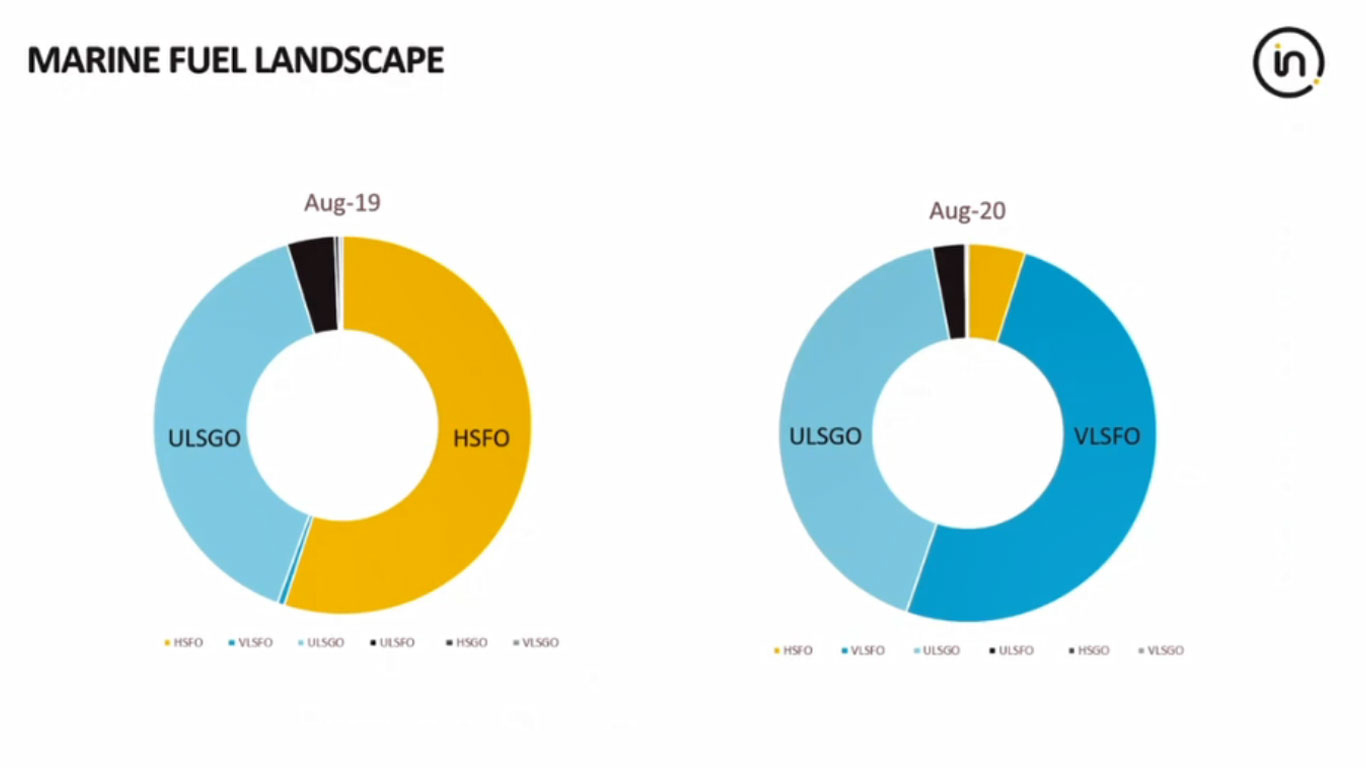 “As you can see, ultra-low sulphur gasoil use has remained consistent at along with the 40% mark. High sulphur fuel oil accounted for only around 5% being used by vessels fitted with exhaust gas scrubber systems, and VLSFOs captured the majority of the remaining market.”

Directly comparing the quality of these two fuels over the last year we see that Q3 2019 was when we first saw VLSFOs enter the market. “As you would expect, we did see a higher proportion of off spec VLSFOs during that time, but this quickly reduced and has been fairly steady throughout 2020.”

“In general, we see a comparable number of off specs for both VLSFOs and gas oils. The difference is in the types of off specs we see.” 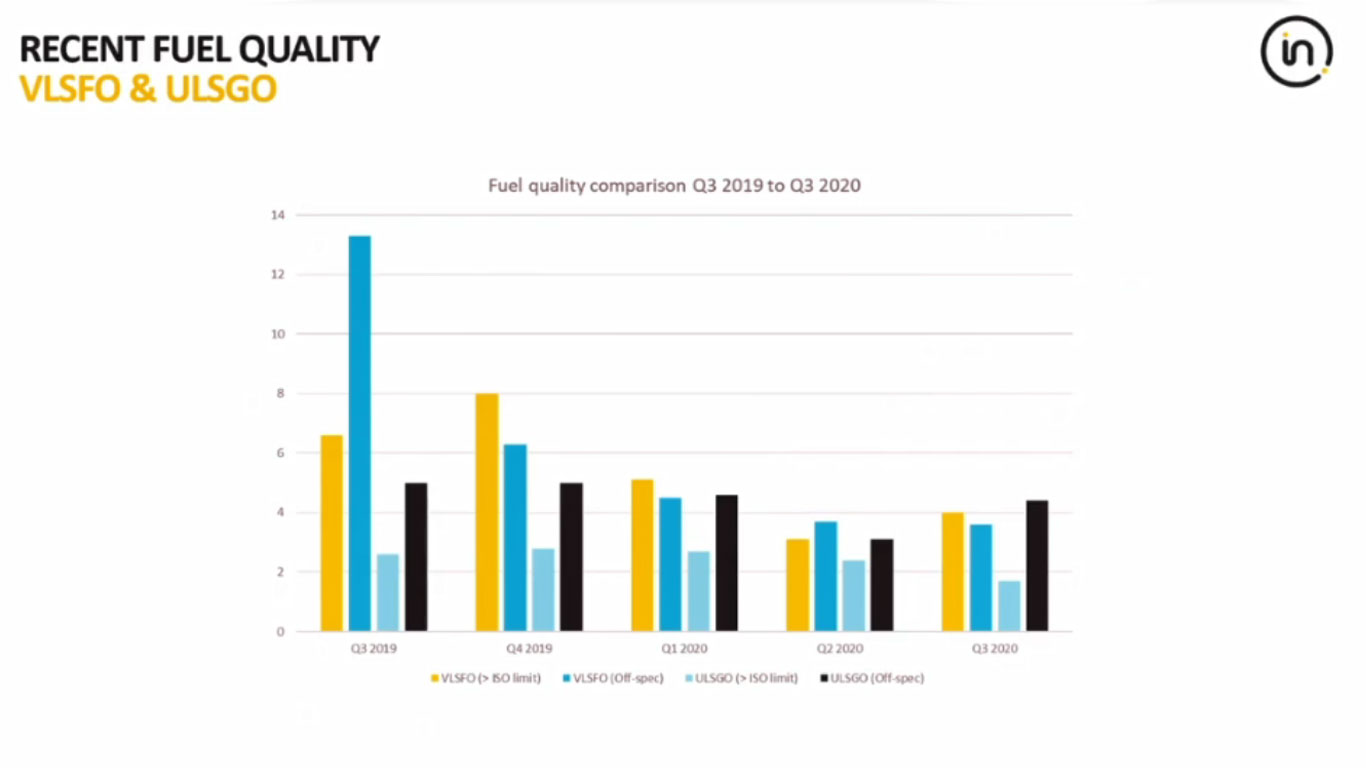 It is also interesting to see the changes in the quality of ultra-low sulphur gas oils. 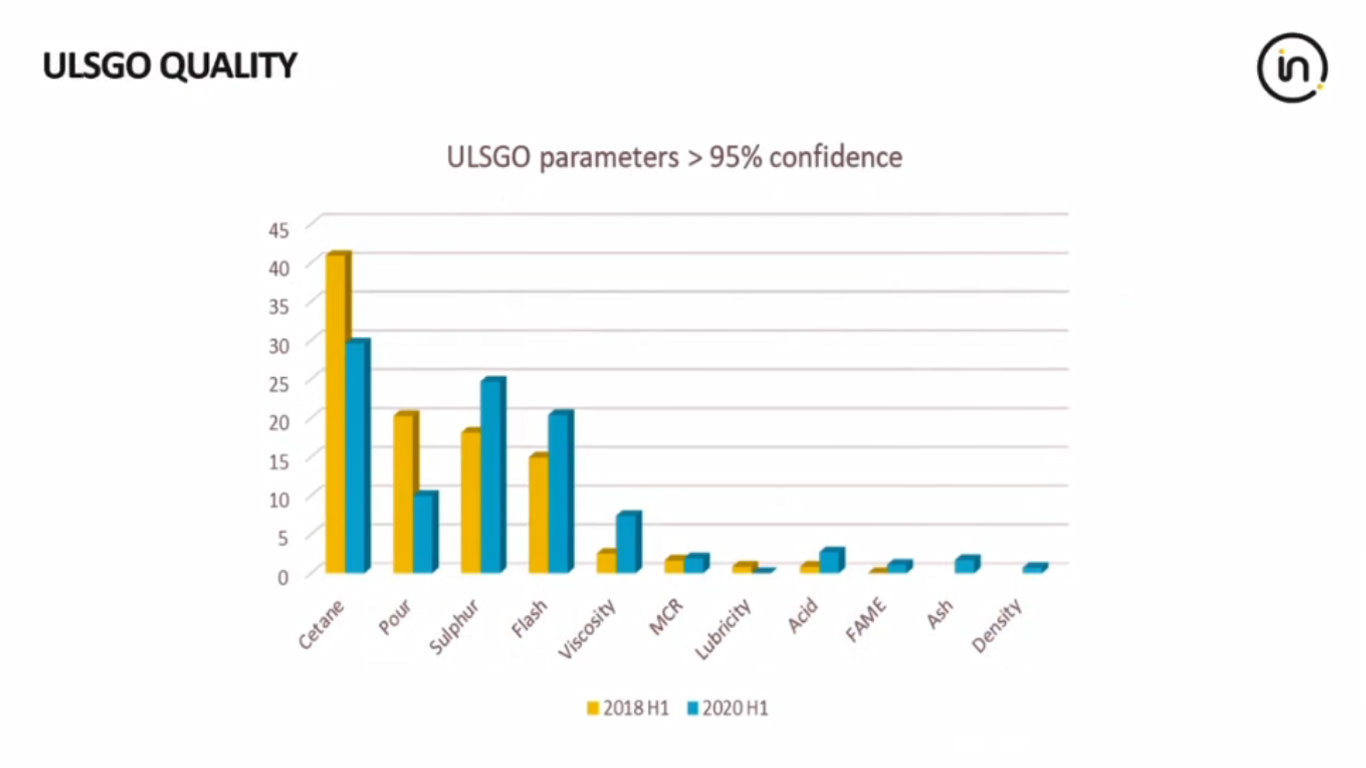 Wardell notes that a comparison of the parameters tested as off spec for gas oils tested during the first half of 2018 and the same time period for 2020, in 2018 Cetane represented around 40% of the off specs with gas oils, with pour being in second place, accounting for around 20%.

In 2020, while Cetane and pour point issues have not gone away, they don't represent as higher percentage. Instead, the occurrence of off spec flash point and sulphur content have increased.
“So, you could say that severity of the issue seen in gas oils has increased.”

In the lead up to IMO 2020, the International Organization for Standardization produced the publicly available specification. This highlighted that specific consideration should be given to kinematic viscosity, core flow properties, stability, ignition characteristics, and catalyst fines.

“With some experience behind us, we know that not all of these parameters have caused the problems that were anticipated, particularly catalyst fines and ignition characteristics,” states Wardell.

Before focusing on the other properties, Wardell notes that it is worthwhile looking at sulphur – the main reason behind IMO 2020. 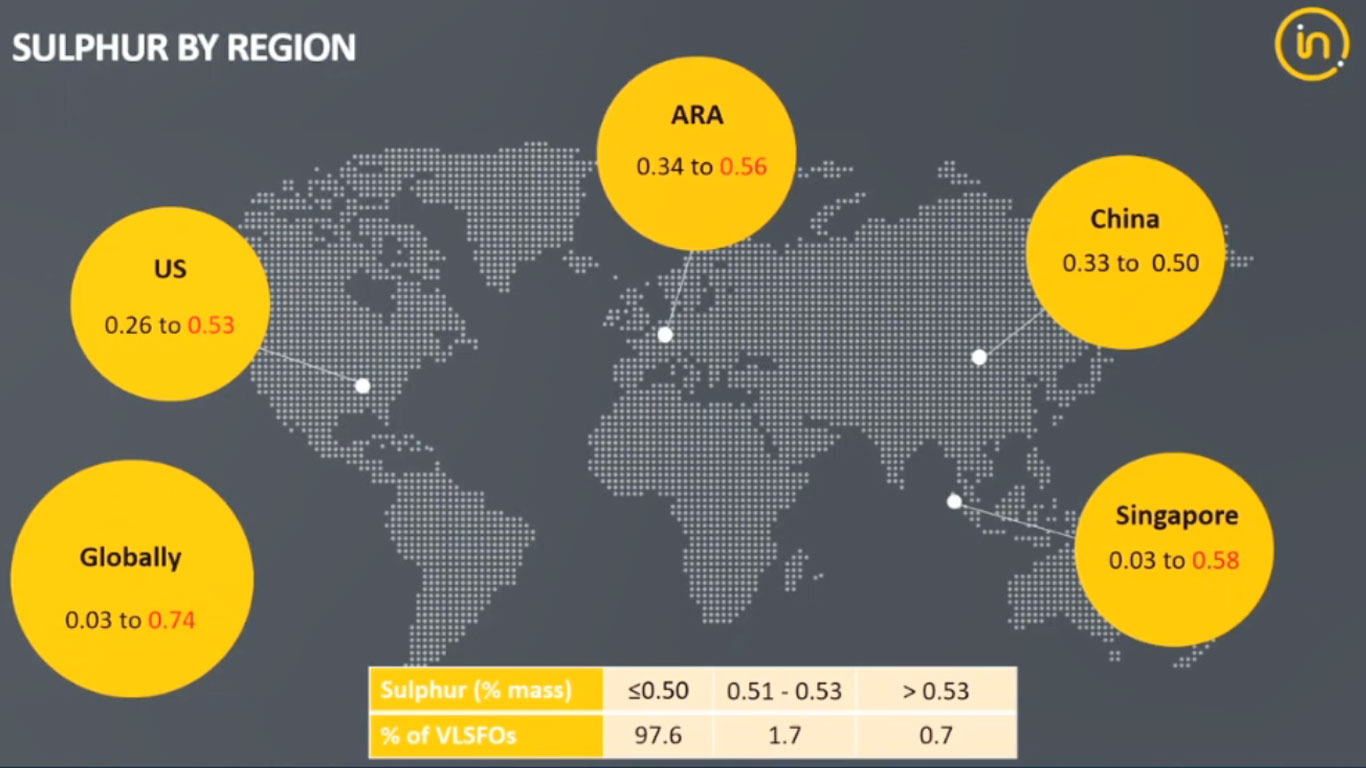 Without dwelling on the specific data for each region, in the first half of 2020 we can see that 97.6% of VLSFOs samples tested at Intertek Lintec laboratories have been within specification for sulphur, 1.7% full with a 95% confidence interval (0.51 and 0.53 percent), 0.7% of VLSFOs are deemed to be of specification (greater than 0.53%).

Moving on to viscosity, Wardell notes that, “what you notice instantly is the huge variability even within given regions. As you can see on a global basis, we have tested the VLSFO's with a viscosity as low as 2.22 centistoke (cSt), up to 597 cSt. So, fuels with characteristics similar to a gas oil through the entire range to fuel similar to 500 or 700 cSt fuel oils.”

“But as you can see, almost 60% of VLSFOs have a viscosity less than 100 cSt. Knowing the viscosity of the fuel is now more critical than ever because you may purchase a 10 cSt fuel in one port, and a 380 cSt fuel at the next and the vessel has to be able to manage this.” 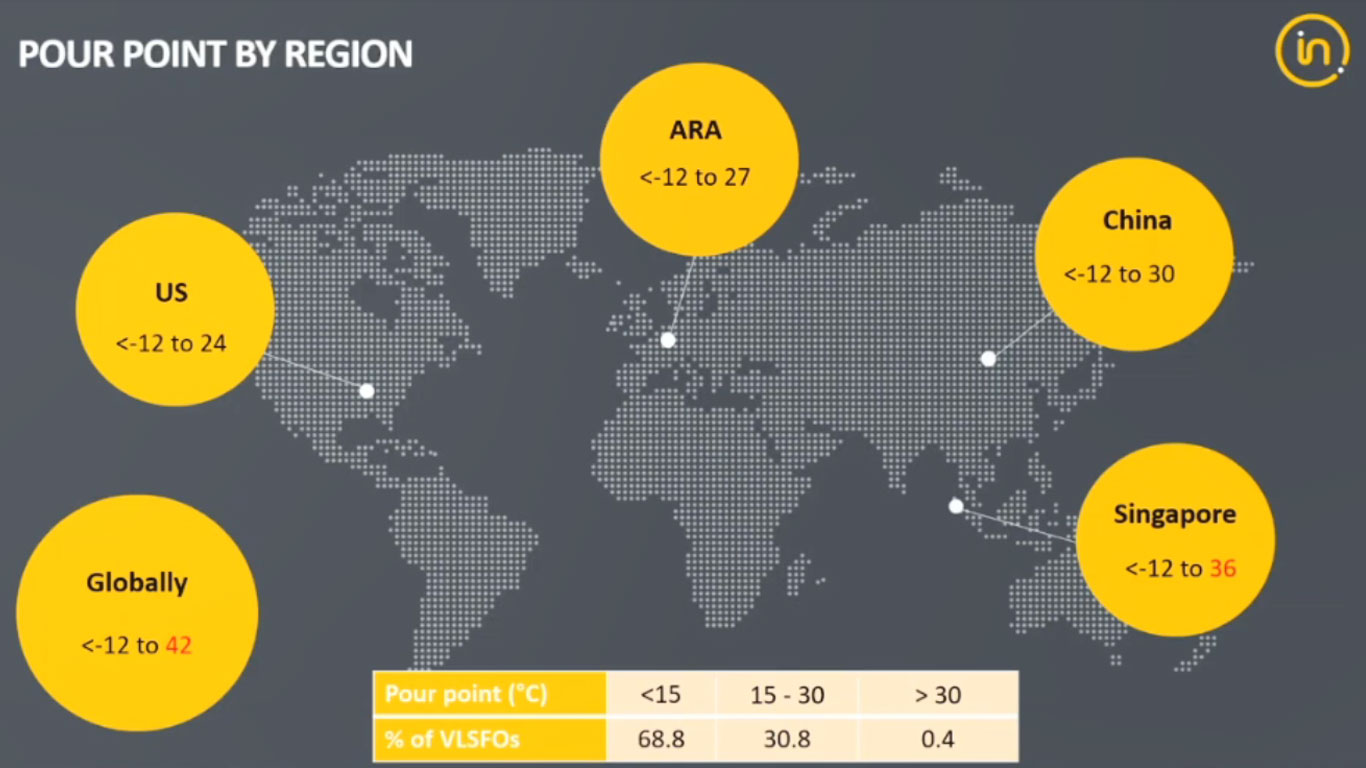 “Pour point again is very variable, and we have seen fields for the pour point as high as 36° Celsius, which again very much impacts on how the fuel is stored and handled on board. Over 30% of samples have pour points between 15 and 30° with 0.4% in excess of 30°.”

Wardell notes that pour point is a critical parameter for VLSFOs, it isn't the quality parameter of interest anymore as wax appearance temperature is now also very relevant. 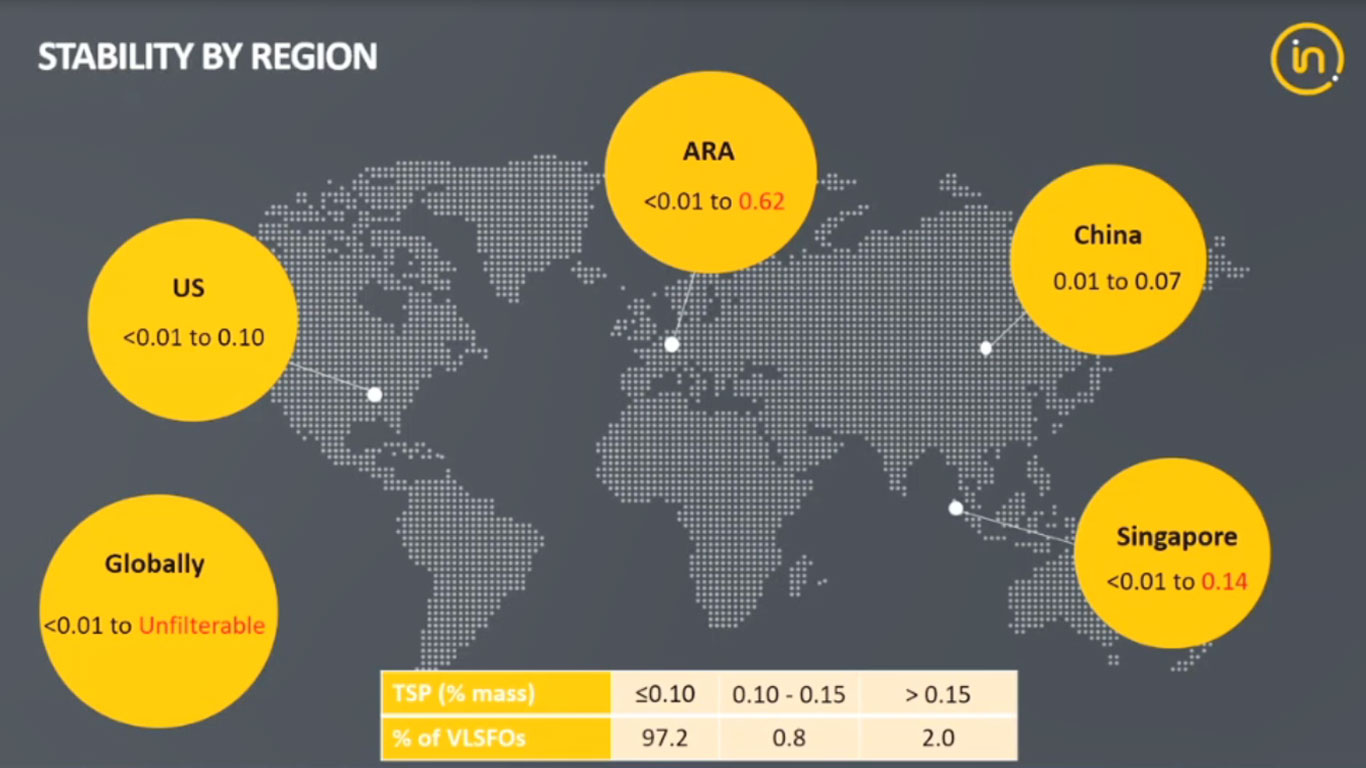 Stability is the parameter which is causing the industry at very large headache.

“As you can see, 2.8% of VLSFOs exceed the 0.1% limit, with 2% of those being in in excess of 0.5%. The total settlement potential, along with sulphur, are the two largest contributors to VLSFOs being deemed off specification.

Of the operational issues which had been reported to Intertek Lintec, there have been quite a range of problems ranging from piston ring failure and cylinder liner damage, deterioration of rubber seals, microbial contamination, deposition of solids on cylinder head and some fuels have reportedly having unusual odours.

“We have seen a number of cases of fuels containing chemicals which do not occur naturally in marine fuel, and this was the case for some fuels having an unusual odour and others where seals on board the vessel showed signs of deterioration.”

“We've also seen some cases of microbial contamination, so it's as critical as ever to maintain the cleanliness of the fuel system and ensuring it is kept dry as possible. This should be closely monitored as we see more biofuels being introduced into the market because of the affinity of fatty acid methyl esters to attract water.”

Wardell believes that the two problems which deserve more detail - and are often coupled together - are the large number of cases of sludging during purification and cold flow issues.

“Now these cases can occur with fuels that were shown to have a high total sediment. There are also a significant number of cases where the fuel was tested to be on spec for stability.”
So, what is the cause of sludging?

Wardell believes that fuel instability accounts for the majority of sludge in cases experienced and this may be due to the composition of the fuel blend, it may be time related (the fuel becomes unstable overtime), or perhaps due to thermal instability (subjecting the fuel to higher temperatures may result in sludge).

“For those who have experienced sludging issues with high sulphur fuels you'll be very familiar with the term asphaltenes.” Asphaltenes and naturally occurring in crude oil and under normal circumstances are maintained in solution by naturally occurring resin acting as dispersants.

“If the solubility of an asphaltenic fuel is altered, perhaps by blending with the less aromatic cutter stock, asphaltenes may precipitate and result in sludge formation. We still do see some examples of asphaltic sludge.”

VLSFOs different from high-sulphur fuel oils as they tend to be much more paraffinic in nature. “So, sludge from VLSFOs can be waxy. It is often the case that we see both types of components precipitated together. Contamination can also occur if non-marine related chemicals are present in the fuel as chemicals can cause the fuel to destabilize.”

The other cause of sludging is due to fuel incompatibility between two parcels of fuel. In this case, Wardell recommends it is always best to keep fuel segregated as much as possible on board.

The difference between the cloud point on the pour point for distillate fuel is small - cloud points typically being below 10° C.

For VLSFOs the only cold flow tests included in ISO 8217 is pour point. “The reason for this being that VLSFOs are opaque in nature, so the methods used for CFPP in cloud point do not apply. However, VLSFOs do have the equivalent of a cloud point and this is termed the wax appearance temperature and is typically measured using microscopy or differential scanning colorimetry,” says Wardell. In taking a look at a snapshot of core flow data for some VLSFOs, Wardell states that it is worth understanding the difference between wax appearance temperature (WAT) on wax dissolution temperature (WDT).

The WAT is the temperature at which wax crystals start to come out of solution – the equivalent of cloud point of a distillate fuel.

“The as you can see, the difference between wax appearance, temperature and wax dissolution temperature is significant.” 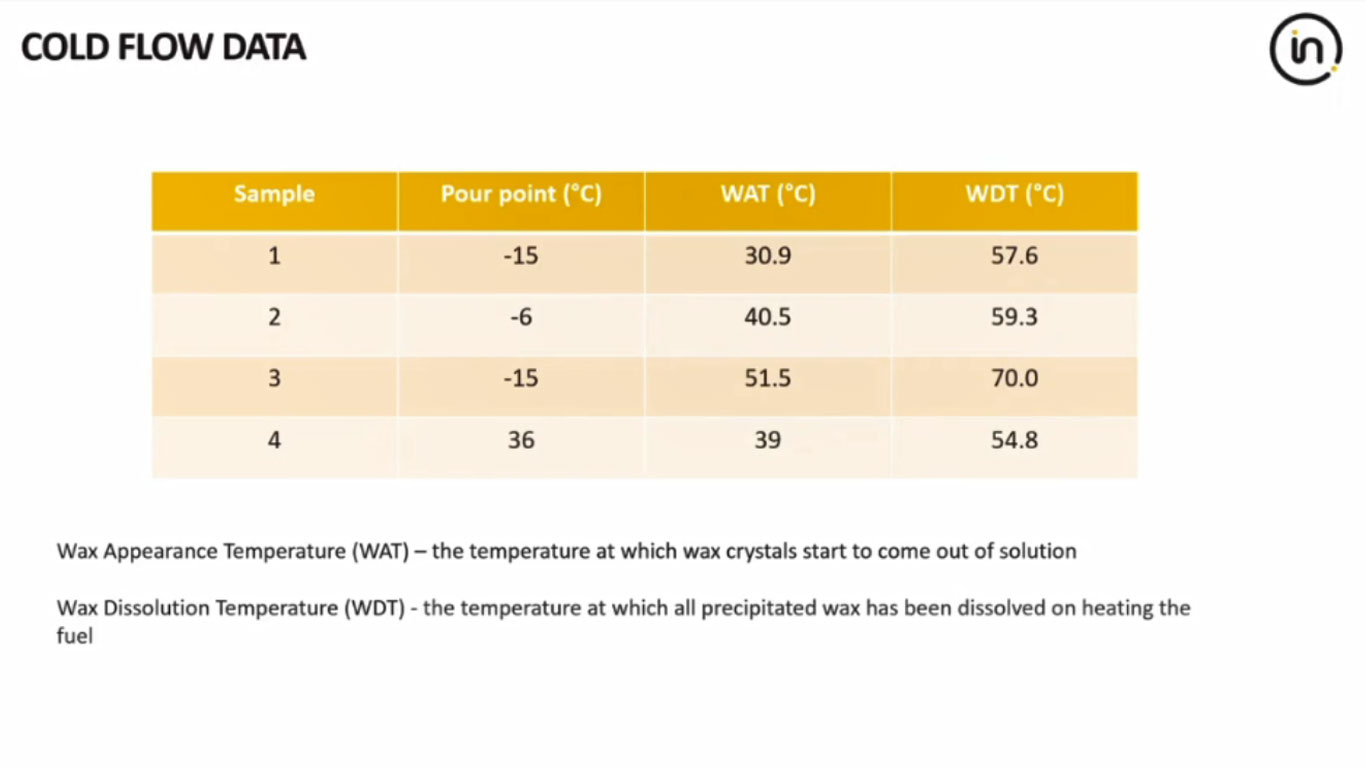 “If the fuel is stored at WAT, then right should not precipitate. However, if it's got below WAT and wax does precipitate, then you would need to heat the fuel to at least 57.6° C to ensure that the wax is in solution prior to purification. Storing the fuel just above that degree C may be deemed to be acceptable solution on board the vessel.”

If we look at samples two and three, however, these fuels have WATs, so whilst the vessel may be equipped to store the fuel slightly above these temperatures, this might not be the ideal solution as it may induce thermal instability of the fuel, particularly if the fuels have a high total sediment potential (TSP).”

Wardell states that a balancing act is required to ensure the fuel maintains its flow properties and at the same time prevent thermal instability from occurring.

In closing, Wardell offers some practical guidance of VLSFOs.

“You need to ensure you know the quality of the fuel that you have purchased prior to using it to assist with on-board fuel management.”

She states that VLSFOs are more complex in nature so correct storage and purification temperatures will assist to minimize operational issues. VLSFOS with high pour point and WAT are not uncommon and you need to take into consideration WAT/ WDT and stability. With regards to purification, one needs to consider WAT/WDT and discuss operating temperatures with purifier manufacturers.

Keep the fuel segregated to avoid any incompatibility problems and if the fuel is to be stored for long periods of time, Wardell recommends as a minimum that you should check the stability of the fuel and monitor it for microbial contamination.

* Edit - This article has been updated to correct some typographical errors