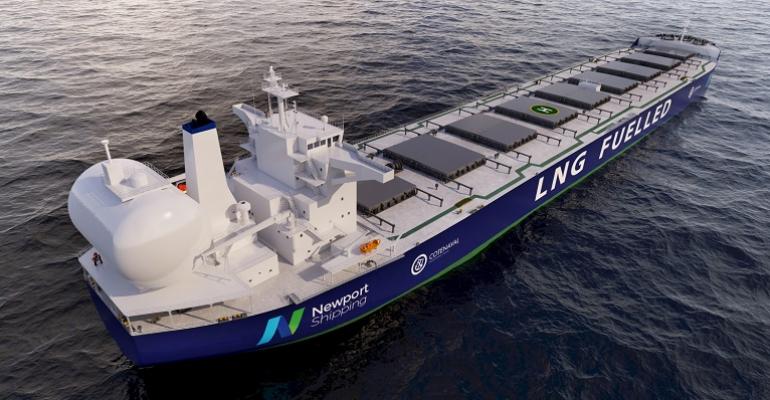 Newport claims that its new retrofit concept could save two-thirds of total project cost by using the new deck-mounted tank system and its network of partner repair yards.

The tanks are designed for installation on crude tanker and bulkers, notably VLCCs and Capesize units, in combination with the engine replacement, the company explained at a webinar yesterday. Tank installation should not require any major modifications to ships’ hulls and the new engines will be suitable for carbon-neutral fuels such as e-LNG and biogas.

The retrofit concept also offers a realistic near-term option to cut carbon emissions while new carbon-zero fuels such as ammonia and hydrogen are developed, Newport said.

Newport Managing Director, Lianghui Xia, said that the arrangement is practical, financially favourable and in line with the increasingly urgent challenge of decarbonising existing ships. Up to 66% of the total cost of a retrofit project – right through from design to completion – could potentially be saved, he said. As an added incentive, the company is offering a deferred payment scheme of 60% of total cost over a period of five to seven years for approved clients.

Newport Shipping launched its repair-oriented subsidiary, Newport Maritime Services, in January. The digital repair platform is designed to simplify the often-complex ship repair contractual process by using a network of shipyards and a coordinated approach to projects.

Newport’s original eleven yards have now grown to 15, and negotiations are under way with six others in North America, South America, Western Europe and Africa.