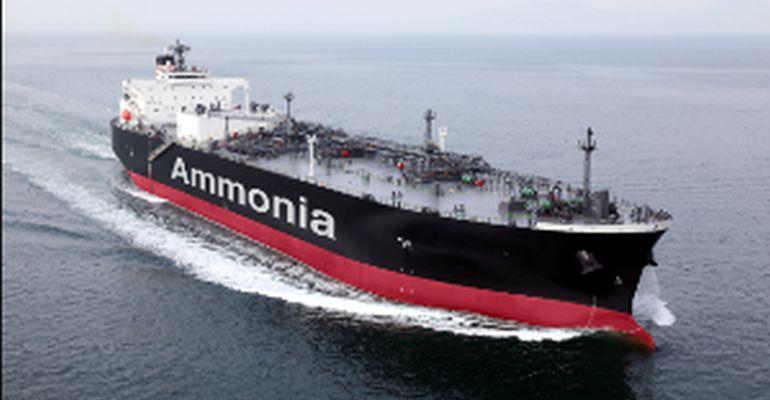 Image of AFAGC
Three Japanese firms – NYK Line, Japan Marine United (JMU), ClassNK – have agreed to jointly start R&D to look into commercialising the use of ammonia as fuel in marine transportation, as part of an effort to reduce greenhouse gas (GHG) emissions.

The partners will engage in the R&D of a liquefied ammonia gas carrier. It is expected that the use of ammonia, which is the cargo, as a marine fuel will contribute to the early realisation of zero emissions for ocean-going vessels.

The trio will also engage in the R&D of a flat-bottomed, non-self-propelled barge equipped with a floating storage and regasification facility exclusively for ammonia. This project aims to contribute to the early introduction of ammonia fuel by utilising the barge, to be known as A-FSRB or Ammonia Floating Storage and Regasification Barge, as an alternative to land facilities for the stable supply of ammonia fuel.

“This joint R&D aims not only to utilise ammonia as a marine fuel but also to establish methods for the mass transportation and supply of ammonia and to become a solution for introducing a mixed combustion of ammonia into coal-fired power stations operated by Japanese electric power companies,” the three Japanese firms said in a joint statement.

NYK, JMU and ClassNK expect that as the need for a transportation infrastructure for stable supply will increase, demand for ammonia fuel will rise as well.

The use of ammonia as fuel can also significantly reduce GHG emissions. In 2018, the IMO set the goal of halving GHG emissions from shipping by 2050 and reaching a target of zero as early as the end of this century.

Parties in Japan have succeeded in generating electricity through the use of a gas turbine with 100% ammonia. In addition, innovative next-generation thermal-power-generation technologies that contribute to the reduction of CO2 emissions are being developed.