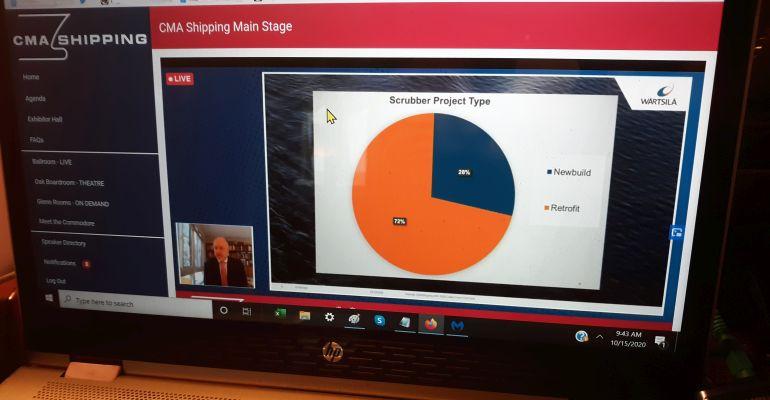 Bigger questions have continued to surround shipping’s path to decarbonisation – getting to 2050 – as the industry still has to deal with issues like adapting to low sulphur fuels and dealing with alternative fuels like LNG, according to a panel discussion at the virtual Connecticut Maritime Association (CMA) conference.

When low sulphur fuels were discussed, Paris-based Lewis & Co’s lawyer Leila Esnard presented a view that, contrary to expectations a year ago, there has been limited action taken by states and Port State Control related to fuel issues (likely related to the Covid-19 situation), and no drastic increase in quality disputes.

Shipowner Gary Vogel, ceo of Eagle Bulk, an owner with scrubbers fitted on most of its 41 handy sizes and supramaxes, highlighted a successful experience with scrubbers, in spite of a narrowed price differential between very low sulphur and high sulphur fuels. The success went further as Vogel indicated that emitted sulphur levels were “88 % less than the IMO regulations call for”, which he characterised as “huge win for the environment and human health.”

Related: Failure get to seafarers home risks shutting down the transportation system

Humphries provided an overview of the scrubber market, citing the extensive scrubber installations, the majority being retrofits, in 2019 and 2020 - mainly open loop and on bigger vessels which consume more fuel. He said that he expected the tail-off of installs evident now to continue. On scrubber bans, the subject of a question from the audience, Vogel cited the benefits of scrubbers and said that ports had perhaps “acted in haste”.

The future, beyond LNG - endorsed by DNV-GL across multiple CMA panels - concerns “alternative fuels”, and how to align the shipping industry with broader climate goals.

Throughout the day, panelists grappled with broader issues such as the applicability of the European Union emissions trading program to the industry at large - a subject that received attention at recent meetings of the Global Maritime Forum.

On the wide-looking “Decarbonization” panel, the views on the bigger issue were expressed adamantly by Scott Bergeron, a top executive at Oldendorff Carriers. Bergeron stressed the need for an industry-wide and worldwide solutions and consistent policies, saying that “having a regional mechanism is destined to fail… it’s going to create too much confusion in the market.”

Bergeron urged shipowners to get engaged, with an eye towards creating sensible regulations and not repeating the sage of ballast water treatment regulations. Echoing the sentiments expressed in the day 1 panel, he said: “It’s time for us to come together”, adding that “there has to be some realism in this discussion”, citing a need for shipping industry participants to cooperate closely with fuel suppliers and equipment manufacturers.

Haskell suggested that the technologies for employing alternative fuels aboard ships are nearly there, but “the key challenge is that the infrastructure is not ready” and that “these aren’t going to go ahead without the investment… the finance community would be taking a big gamble… until the policies are in place to reduce the price gap between renewable fuels, and the fuels of today.”