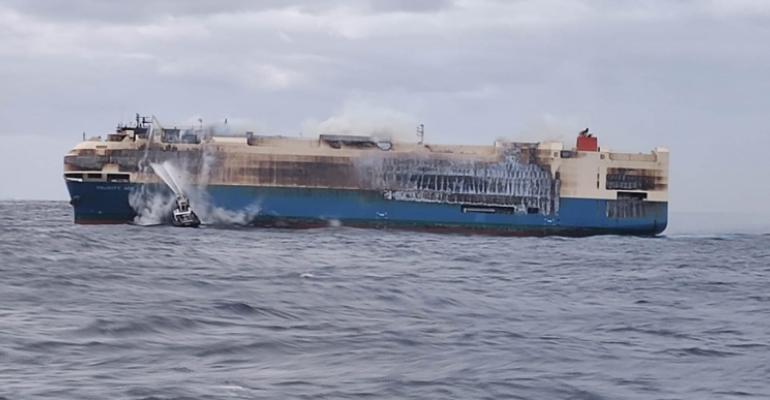 Insurer Allianz’s annual review of safety and shipping shows a record low in total losses, a higher number of incidents, and a focus on catastrophic cargo fires.

The good news is that total losses have continued a downward trend dropping to a low of 54 last year.

“Total losses are at record lows – around 50 to 75 a year over the last four years compared with 200+ annually in the 1990s,” commented Captain Rahul Khanna, Global Head of Marine Risk Consulting, Allianz Global Corporate & Specialty (AGCS).

The not so good news was there 3,000 shipping incidents globally in 2021, with the largest number – 668 – occurring in the British Isles.

Foundering or sinking accounted for 27, some half of all losses, while machinery damage/failure was the cause for one in three incidents (1,311) globally.

Two large fires have led to major losses in a 12-month period – the containership Xpress Pearl off Sri Lanka in May 2021, and less than a year later in February 2022 the fire on the car carrier Felicity Ace which led to it sinking with over 4,000 automobiles onboard.

“Fires on board large vessels remain the top issue for the shipping industry. We continue to see major incidents involving fires on large container ships, and now the emphasis is also shifting to car carriers and ro-ro vessels,” said Capt. Khanna.

Fires combine with increasingly large vessel sizes making it more difficult to bring blazes under control as the report noted fires spread rapidly outpacing the ability of the crew to deal with them.

“The size and design of large container ships and ro-ro car carrier vessels makes fighting fires extremely challenging. Fires need to be contained quickly, yet it may take several hours to get to the base of a fire on a container ship with as many as 20,000 containers on board, stacked ten high,” said Randy Lund, Senior Marine Risk Consultant at AGCS.

The report highlighted that there had been no let-up in containership fires with at least 70 reported over the last five years, although this figure could be conservative as P&I Club Gard estimates there was containerised cargo fire at least once every two weeks in 2020. Fires can spread rapidly leading to a total loss as was demonstrated by the Xpress Pearl in 2021 off Sri Lanka.

Captain Nitin Chopra, Senior Marine Risk Consultant at AGCS, commented: “Despite efforts by the crew to extinguish the fire and previous attempts to discharge the cargo at several ports, fire services were unable to save the vessel.”

Allianz sees a need for regulatory change, but this will take time, so the immediate burden falls on the industry to improve fire detection and protection.

Capt. Khanna said: “We now have ships that are almost too large for the crew to fight fires effectively. There needs to be an urgent review of fire detection and fighting protections and equipment on board large container ships. We hope the IMO will soon come up with revised safety regulations with enhanced fire protection measures for large containerships.”

When it comes to the growing number of car carrier fires electric vehicles are of particular concern with Lithium-ion battery fires very difficult to extinguish and having the potential to re-ignite. The report noted tests by P&I clubs showed ship sprinkler systems alone were not adequate to extinguish EV fires.

At the same time the growing popularity of EVs will see more transported by sea with as many as 70m manufactured annually by 2025, and 230m by 2030.

You can read the full report here