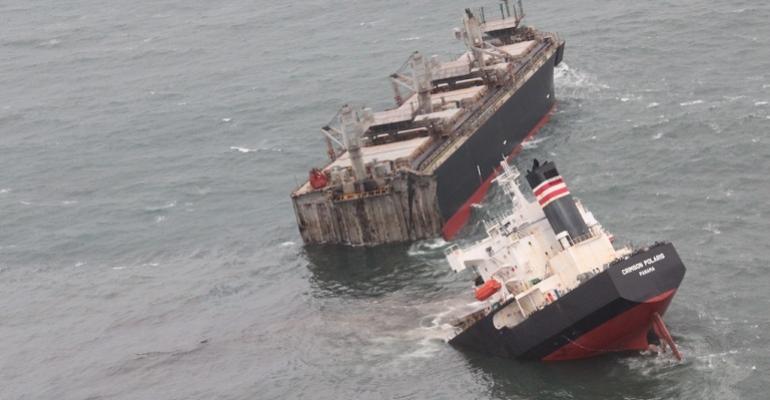 A battle is on to contain oil spilled from NYK-chartered bulker Crimson Polaris that broke in two off Japan on Thursday morning.

Salvors are now battling to contain an unknown amount of oil that has been spilled from the wreck that lies about 4 km offshore the coast of Hachinohi.

As of 7pm, local time on 12 August NYK said, “The Maritime Disaster Prevention Center is continuing to control the oil spill using oil-treatment agents and adsorption mats. In addition, as soon as oil is confirmed to have drifted to the coast, oil recovery companies are prepared to perform beach cleaning.”

The Japanese shipping company said the bow of the Crimson Polaris was floating and held in place by anchor while the stern of vessel appeared to be stranded on the seabed.

A crack in the vessel’s hull developed between cargo holds No.5 and No.6 when it grounded on Wednesday and this worsened causing the ship to split in two.

The vessel had 21 seafarers onboard of Chinese and Filipino nationalities and no injuries have been reported. The Crimson Polaris is owned by MI-DAS Line, an affiliate of Doun Kisen Co. Ltd, managed by Misuga Kaiun Co.Ltd, and chartered by NYK.