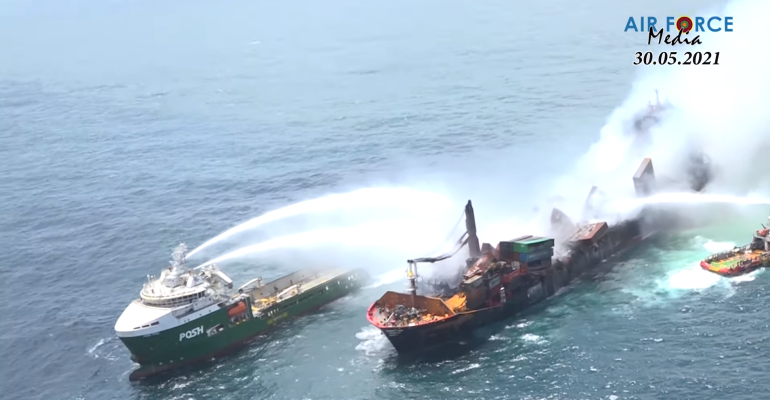 Salvors work to cool hotspots on X-Press Pearl
As salvors report no visible flames on fire-ravaged X-Press Pearl, local police have launched a criminal investigation into the fire.

The latest update from salvors reported that smoke was still issuing from the aft of the ship, and tugs will remain on the scene to spray and mist the vessel to cool hotspots.

“Salvors are still exploring the possibilities of boarding the ship and making a tow connection so it can be moved, with the safety of the team the highest priority,” the ship’s operators X-Press Feeders said in a statement.

The ship was structurally intact with no loss of oil into the water, according to a salvor report from the morning of May 31. Cargo and containers lost overboard have washed up on beaches and polluted the shoreline with plastics and other chemicals. Clean up efforts are underway.

Police told local news that 10 officers had been assigned to a criminal investigation into the incident, and X-Press Feeders said it was co-operating with police. Statements will be recorded from the 25 crew members as part of the investigation, police said.

X-Press Feeders said most of the crew were serving out COVID quarantines in dedicated hotels. Two crew were hospitalised with leg injuries, one of whom is recovering in a local hospital, the other is recovering from their injury in a military hospital after testing positive for COVID, albeit asymptomatic.