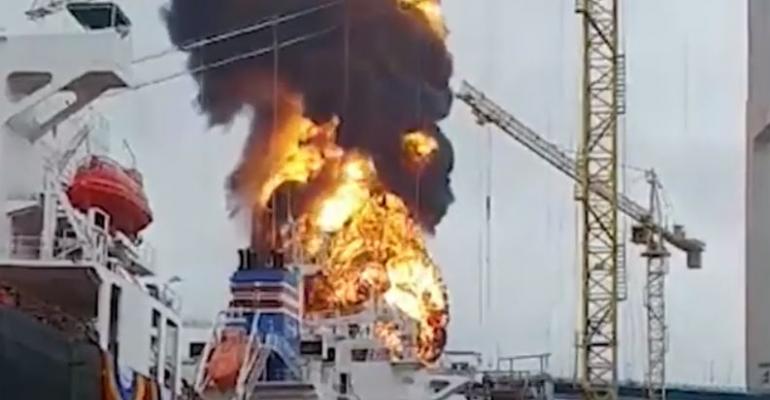 The fire on board a Stolt Tankers vessel Stolt Groenland in Ulsan, following an explosion, has been extinguished.

The explosion that the rocked the Stolt Groenland around 11am on Saturday while at berth in Ulsan and preparing for a ship-to-ship transfer with the Odfjell vessel Bow Dalian.

Videos show a massive fireball caused by the blast on the Stolt Groenland.

Various reports say that between 9 and 18 people were injured in the blast, one seriously.

Stolt Tankers reported that the fire on the vessel was extinguished around 11am on 29 September and that all crew had been safely evacuated with injuries to one seafarer. The Stolt Groenland is reported to be stable with firefighters continuing to spray the vessel with cooling water.

Odfjell said the Bow Dalian had been preparing for an STS operation with the Stolt Groenland at the time of the explosion, and the crew had evacuated the vessel. The Bow Dalian has now been towed to a lay-up berth in Ulsan port.

The full extent of the damage to the two vessels remains are yet to be established and the cause of the blast and fire is unknown.