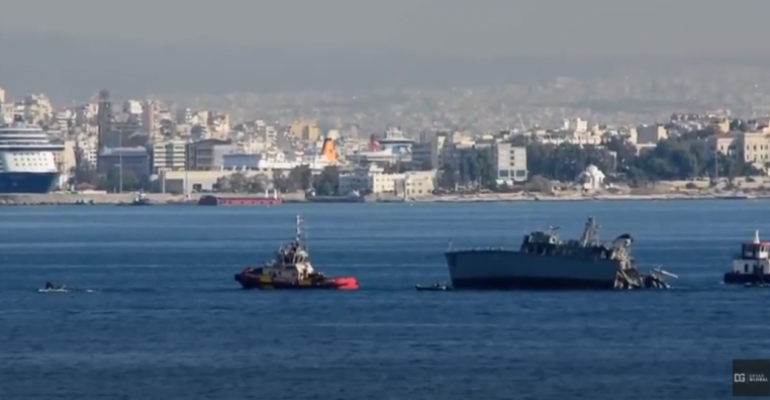 The 27-member crew of The Hellenic Navy minesweeper Kallisto lost its stern after being in collision with a container ship off Piraeus port just after daybreak on 27 October.

The navy vessel’s 27-member crew was evacuated, with two being treated for minor injuries while four had to be rescued from the sea.

The 57 m Kallisto, had sailed from the navy base of Salamina, started taking on water after being hit by Portuguese-flagged 4,405 teu Maersk Launceston built 2005, managed by JT Essberger and on charter to AP Moller-Maersk.

The container ship had just left Piraeus container terminal which is opposite the naval base bound for Cannakkale, Turkey, when the accident appears to have happened as the vessels left the more crowded waters.

The minesweeper began listing and a tug towed its bow section back to Salamina naval base. The container ship appears to have suffered no damage nor were any crew injured but the container ship remains at anchor in Piraeus.

An investigation has been launched into the cause of the accident by the Piraeus Port Authority (PPA) and the Hellenic Coast Guard.

"A first assessment of the vessel has not shown damage to the vessel. A further assessment will follow once the ship is a its lay-by berth," said Essberger which noted the Maersk Launceston crew participated in the rescue operation for the seafarers of Kallisto.

The manager said the vessel has been requested to stay in the area and is currently at anchorage off the port of Piraeus. It said: “Cause of the incident is yet unknown. The Coast Guard have been conducting preliminary interviews with the crew of the Maersk Launceston. Once at lay-by berth vessel will continue to assist with the investigation."