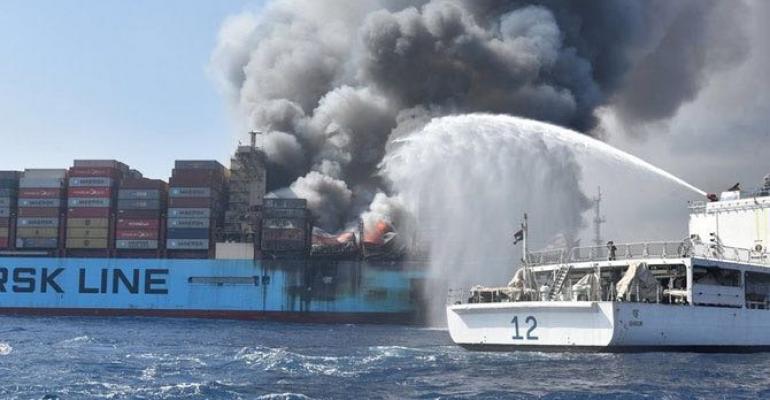 Containerships that carry thousands of different cargoes, many of them dangerous goods, are ill equipped to fight fires that can break out inside the boxes. Additionally the crew are not trained to meet the challenge of often complex and highly treacherous situations.

Cargo fires have long been a cause for concern in the maritime sector, because the consequences of moving mis-declared as well as properly labelled dangerous cargo can be multiple crew deaths, as with the Maersk Honam last year, and millions of dollars of lost revenue leading to long litigation battles, again as is now happening in the Maersk case.

Six fires on board container vessels in the first three months of this year have further concentrated the collective minds of the industry that over the last two years has been averaging a cargo fire a month.

It was a subject that was tackled by a highly skilled panel of experts at Clyde & Co.’s offices as part of this month’s London International Shipping Week (LISW), though the panel conclusions were concerning there was a feeling that the issue is finally being addressed by the industry, in part at least, but that there is still some way to go.

Daniel Jackson, a partner at the science end engineering consultancy, Burgoynes, told the audience that some cargoes decompose and release heat which is not easily dissipated due to the close proximity of other cargo containers, driving the temperatures ever higher, “The rate of increase in temperature doubles for every 10 degrees centigrade increase in temperature,” explained Jackson.

When the temperature achieves a critical level, fire breaks out and eventually the intensity leads to “thermal runaway” meaning that all available combustible materials are ignited, and the situation quickly becomes uncontrollable for the crew.

Complicating matters is the fact that other cargo that may also be dangerous, and which may have different properties, that is it may be sensitive to water for example, may be stowed close to the source of the first accident, and that could mean that the crew, in fighting the initial fire, could inadvertently cause a secondary explosion and fire.

Read more: Containership fires – the importance of knowing your customer

Former Lloyd’s Register container shipping expert, David Tozer, explained that the cargo stacks on a large container vessel are only 50-60 mm apart, leaving no space for crew to fight fires that have developed deep in the hold.

Tozer, who spent 32 years at Lloyd’s Register, believes that one solution to the dangerous goods problem in container shipping is to regulate more specifically so that any modifications will need to be carried out by all shipping lines, meaning that no one line will be disadvantaged.

A former container ship master, Amerinder Singh Brar, also pointed out that the fire fighting equipment on board modern container vessels is inadequate, he said that container stacks can be up to nine containers high, and no fire hoses can reach that high.

What is more the latest Safety At Sea regulations, the SOLAS convention, were developed in 1983. Singh Brar pointed out that the latest ultra large container ship, the MSC Gűlsűn, which was delivered in August with a further 10 vessels yet to be delivered, was built to regulations that are more than 30 years old.

“Would you buy a car built to 30-year old standards?” asked the Singh Brar, who now works as a consultant master mariner to London Offshore Consultants.