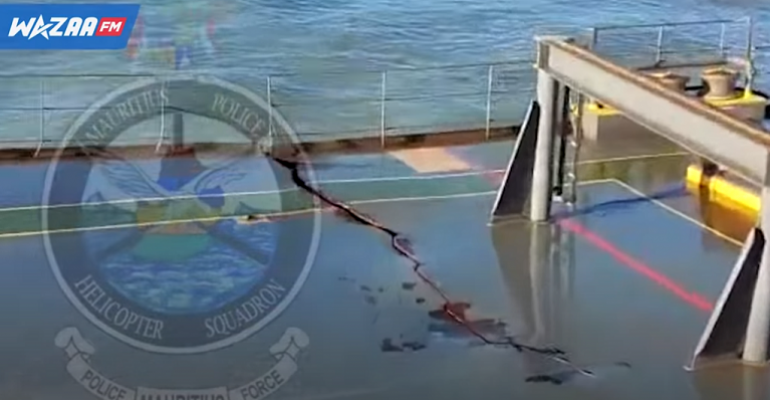 Screenshot of hull crack in the Wakashio taken WazzaFM YouTube video
Almost all the fuel oil has been removed from onboard the Japanese bulker Wakashio stricken off the island of Mauritius.

Salvors have been racing against time to pump 2,600 tonnes of fuel from the capesize  bulker owned by Nagashiki Shipping and chartered Mitsui OSK Lines (MOL) which grounded off Mauritius on 25 July and is in danger of breaking up.

“At the time I’m talking to you, almost all the oil has been removed from the ship,” Mauritius Prime Minister Pravind Jugnauth told reporters, according to remarks shared by his office, Reuters reported.

According to the statement all the fuel had been pumped from the vessel’s fuel tanks but some residues remained.

The unladen bulker had 3,800 tonnes of very low sulphur fuel oil (VLSFO) and 200 tonnes of diesel oil in its fuel tanks when it ran aground and some 1,180 tonnes of VLFSO leaked from the fuel tank with 1,000 tonnes of this leaking outside the vessel itself.

Mauritius declared a State of Environmental Emergency following the spill and there are fears that the vessel would break up as cracks in its hull have been growing.

The Wakashio was in ballast from Singapore to Tubarao, Brazil when it hit bad weather near Mauritius on 25 July according to flag-state Panama.

“It was then, necessary to perform various maneuvers to change course due to the state of the sea. All maneuvers were supervised by the Captain and First Officer of the ship who were aware of the situation and weather conditions,” Panama Maritime Authority (AMP) said in a statement. At 7-25pm on 25 July the Captain, the First Officer and the Chief Engineer, noticed the vessel had stopped moving and was stranded.

According to AMP the vessel successfully completed its last Port State Control inspection in Port Hedland, Australia, the 14 February 2020 and the last flag inspection was completed successfully in Kawasaki, Japan, 1 March 2020.

The authority said investigations were being conducted by the Panama Ship Registry.