ONE Apus estimated to have lost 1,900 containers in severe weather 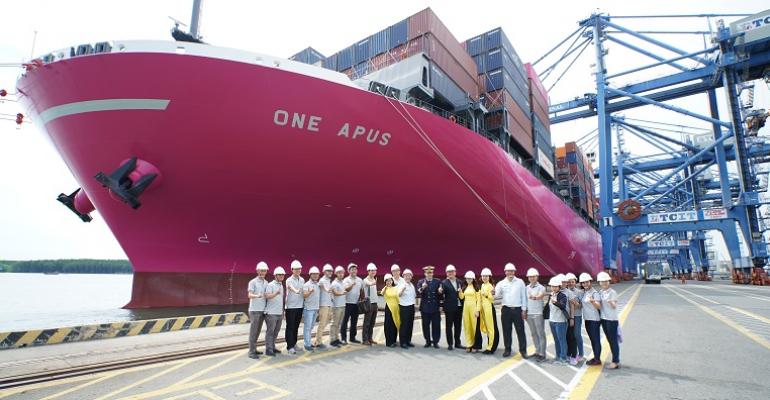 The containership ONE Apus is estimated to have lost more than 1,900 containers overboard after it was damaged in a violent storm in the Pacific on Monday.

The 14,000 teu containership, owned by Chidori Ship Holding, managed by NYK Ship Management, and chartered to Ocean Network Express (ONE) has now turned back from its voyage been Yantian, China and Long Beach, US and is headed to Japan.

According to a statement the ONE Apus encountered a violent storm cell producing gale-force winds and large swells, roughly 1,600 nm northwest of Hawaii at 23-15 hrs local time on 30 November. As result of heavy rolling of the vessel it is estimated that more than 1,900 containers could have been lost overboard of the vessel on 1 December.

“Early investigations onboard the ONE Apus have determined that the impacted container bays remain unsafe for close-quarter inspections; however, it is estimated that the number of lost or damaged units could exceed 1,900, of which some 40 are believed to be DG [dangerous goods] containers,” the statement said.

A spokesman confirmed that all the crew were safe and uninjured in the incident.

Related: ONE Aquila diverted after container collapse in bad weather

The vessel is now sailing to Japan and the owners and managers are seeking a suitable port where it will be possible to right unstable container stacks and assess the damage. It is not known at publication time how long it will take the ONE Apus to reach Japan.

Navigational warnings have been broadcast  the Joint Rescue and Coordintaion Centres (JRCC) in Honolulu and Guam to shipping in the area warning potential hazards from the containers lost overboard.