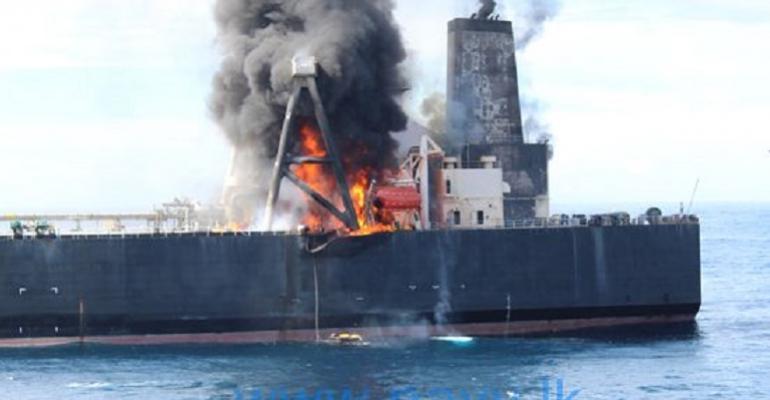 Sri Lankan and Indian Naval forces are working together to try and bring under control a fire onboard the laden VLCC New Diamond that erupted on the vessel at 8am on 3 September, leaving one crew member dead.

The Sri Lankan Navy (SLN) said that the New Diamond was sailing 38 nm off Sangamankanda Point east of Sri Lankan seas that a fire erupted on the vessel after a boiler room explosion. The 300,000 dwt, 2000-built, New Diamond, is operated by New Shipping and registered in Panama, according Equasis.

It said that as of Friday morning the Sri Lanka Navy, Sri Lanka Air Force, Sri Lanka Ports Authority, the Indian Navy and the Indian Coast Guard were working together to control the fire.

The SLN said that 22 of the 23 crew onboard the tanker had been rescued. The third engineer Kalmunai Hospital after sustaining injuries and was reported to be in stable condition. One Filipino seafarer died in the explosion, based on preliminary investigations.

The 21 uninjured crew evacuated from the VLCC have been taken onboard SLN vessels and isolated according to health guidelines.

The 270,000 tonne cargo on the vessel has so far been unaffected by the fire and the SLN said “necessary steps are being taken to prevent the fire from spreading”.

“Meanwhile, there is still no risk of the ship leaking oil into the ocean due to the unfortunate turn of events. However, Sri Lanka Navy, the Sri Lanka Coast Guard, the Sri Lanka Ports Authority and the Marine Environment Protection Authority and other stakeholders are geared up to take necessary steps to mitigate and manage the risk of possible oil spill in future due to this disaster,” it said.

The New Diamond was 25nm offshore at 5am this morning with 10 vessels involved in firefighting operations. Aeriel firefighting was due to resume at 5-30am.