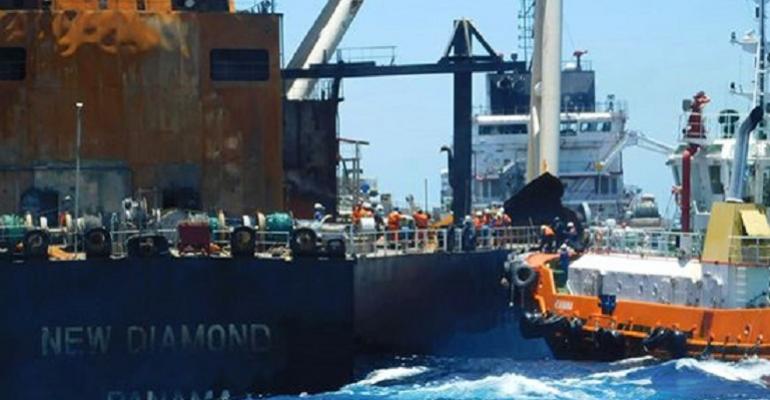 Salvors have managed to board the stricken VLCC New Diamond which suffered a serious fire following a boiler room explosion on 3 September off Sri Lanka that left one dead.

Having successfully doused a reignition of the fire on the laden tanker the Sri Lankan Navy said that salvors had been able to board the vessel.

A 17 member salvage team and four from the Sri Lankan Navy were able to board the tanker to carry out inspections and disaster assessments. The Navy said operations were being carried out in rough sea conditions about 50nm off Kalmunai.

A fuel slick about 10 to 30 meters wide and about a nautical mile long has been detected, however, the fire was prevented from reaching the New Diamond’s 270,000 crude oil cargo which would have resulted in a major environmental disaster.

The Sri Lankan Navy said that preliminary investigations have been completed, but gave no details.

The 300,000 dwt, 2000-built, New Diamond, is operated by New Shipping and registered in Panama, according Equasis.