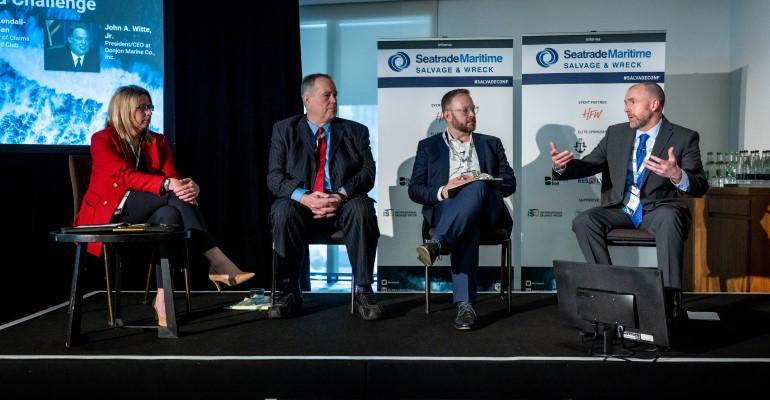 The salvage industry cannot realistically fully prepare for the casualty of a mega vessel, according to UK SOSRep, as the variables and impacts are too varied.

Speaking at Seatrade Maritime Salvage & Wreck in London on December 1, the UK Secretary of State's Representative (SOSRep) Stephan Hennig, who oversees maritime disaster response in the UK, said there were real limits to the amount of preparation that can be made for a mega casualty.

Hennig said a recent war game around a hypothetical mega vessel grounding debunked many assumptions made by various parties about the resources available and practicalities of dealing with a mega vessel grounding. One party suggested feeder vessel could be used to help offload containers from a stricken mega vessel, until a shipping line said that feeder vessels are all busy, not waiting around for a casualty incident.

In the planning phases for the workshop, Hennig said he doesn’t think the industry can prepare for a mega vessel casualty: “We can talk about it, but where are we going to put 10,000 boxes? The ports are all full, you would have to probably requisition land somewhere that you would have to make ready to temporarily decamp boxes to. But that's just, that's just one minutiae of the entire response.

“I don't I don't think we can prepare for this realistically. At the end of the day, it's a large project and we'll need to, at the outset of the response, manage the expectations in the public and the politicians' eyes to say: this is going to take a very long time.”

Fellow panellist John A. Witte, Jr, President/CEO, Donjon Marine gave a presentation on the process of recovering the Ever Forward, a 12,000 teu containership which ran heavily aground in Chesapeake Bay, and was the largest marine casualty in US waters at the time.

Ever Forward was already considered a mega vessel, and Seatrade Maritime News asked John how the operation would be impacted if the ship were twice the size, like the 24,000 teu ships already on the water.

“It brings to mind the question of how do you eat an elephant? One bite at a time,” said Witte.

Given the same location and conditions, Witte said: “I would assume we would take the same approach that we did on the Ever Forward, but it’ll take longer. We get back to the issue of expense, expectations and things of that nature.

What would change the operational profile significantly would be if the vessel were further offshore in an environment with more hostile weather and conditions, he added.

One bright spot for the sector is that technologies are constantly being developed to bring new approaches to dealing with salvage operations and reduce risks.

“My bottom line is as we move on, while that the concerns and the problems are going to continue to increase, the abilities and the technologies that salvors and related services companies use to support these casualties will increase as well,” said Witte.

Hennig added that with increasing size of vessel comes an increase in the number of interested parties. “In the height of COVID, for a small coaster vessel, there were over 30 parties involved. 30 different organizations… who all have to be managed, who all have their own their own expectations, however realistic or unrealistic they were.”

The Group system has so far managed to prove itself capable of absorbing the costs of a casualty, from first party property loss, cargo claims and monumental costs of removal and pollution prevention and clean up, said Kendall-Marsden.

“My concern, though, is how the market’s going, how we're going to see more of these larger ships hitting the waters in years to come and trading to more challenging areas where they don't have the infrastructure and they’re not used to dealing with those ships.”

“Could we get to a point where the reinsurance tolerance is breached? And reinsurers say, actually, we're not prepared to continue as we currently are, we need to do something about this. It was 10 years ago after the MV Rena and Costa Concordia that there was talk in the market about that - possibly imposing a limit on cover.”

Session chair Claire Womersley, Partner and Master Mariner, HFW said that a decade ago at Salvage & Wreck, attendees were worried about coping with mega vessels. “Now we're saying, what are we going to do when an even mega-er ship accident happens, and it does kind of go on.”

Womersley added some context around those concerns, which were evident throughout the two-day conference, using the grounding of the Ever Given as an example: “It was actually quite a simple casualty at the end of the day, just a grounding. There was no explosion, there was no loss of cargo, there was no loss of life, there were none of those elements… it was just unlucky where it was.

“I think all of us are fearful a bit, but that the Armageddon casualty is still to come, which is a really sobering thought,” said Womersley.